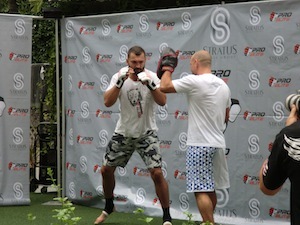 Media week for ProElite kicked off today at the Princess Kaiulani Hotel in beautiful Waikiki, Hawaii, this afternoon with open training for three of the fighters on the main card: Andrei Arlovski, Kendall “da Spyder” Grove, and Reagan Penn.

BJ Penn was also in attendance, as he cheered on his brother and close friend, Kendall Grove. T. Jay Thompson, Vice President of ProElite Fight Operations, jokingly told BJ that he would now be referred to as the brother of Reagan Penn (and wouldn’t be known for his fight career) after Reagan’s debut on Saturday.

It’s been three long years since a big event like this has made it’s way to Hawaii. Thank you, ProElite MMA and T. Jay Thompson for bringing the “big show” back. The fans are hungry for more, and with UFC veterans like Andrei Arlovski, Joe Riggs, and local boy, Kendall Grove, this event does not seem like it will disappoint.