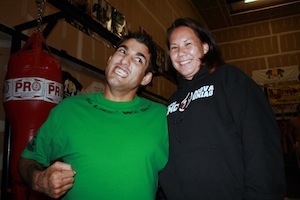 With all the hype surrounding Saturday’s ProElite return to Hawaii showcasing former UFC Heavyweight champion Andrei “The Pitbull” Arlovski, you might almost forget about the much anticipated rematch between local boy, Kendall “Da Spyder” Grove and Joe “Diesel” Riggs.  I’m not gonna lie, I kind of almost forgot about it too.

Grove, after coming off of a two fight losing streak and being released by the UFC, is finally making his debut back in the cage at home after six years.  A lot has changed since he last fought on Maui in 2005.  Not only is this Maui boy a seasoned fighter, he has completely evolved as a man.  Da Spyder got married, had a couple of kids, has a record of 7-6 in the UFC, and owns and operates the successful I&I Training Center on Maui, where he has molded many new up-and-coming mixed martial artists from the island of Maui.

I was fortunate to catch up with Grove before the ProElite press conference today for a short interview:

How do you feel about fighting at home (in Hawaii) for the first time since 2005?

Fighting at home is like a dream come true… just it’s been awhile… especially the circumstances of this fight.  We fought before… (he) Joe Riggs gave me my first loss so it’s just, you could say, “icing on the cake.”  Anything can happen in a fight and I don’t know how he’s been training… I’ve been training hard.  It’s the making of a good fight.  I’m way better.  I got 6 more years of experience from that first time we fought so I’m very excited to come home and fight.  Especially with a hyped fight like this.

Yeah… so it’s been like 7 years since you fought each other, right?

How have you prepared for this fight any differently than preparing for a UFC fight?

Big difference.  I took myself outside of my comfort zone… took myself away from my wife and kids… and Maui.  I went to Orange County.  Got to train at the RVCA facility with BJ, Michael Bisping, Erik Apple, Reagan, and a lot of guys… and (trained at) LA Boxing.  I got a new head coach, Justin McCully, who has been in the game since the beginning of this and who has kinda paved the way for newer fighters.  So I took myself to the mainland and I got ready there.

But you’ve been working with Justin McCully for awhile though, right?

Yes… yes… I’ve been working with Justin for awhile.  He’s always been like an assistant coach but then ever since Rude Boy (Troy Mandaloniz) went to work with BJ, I was kinda by myself training myself at home.  Justin would come and help me train but never at that position as my head coach.  But now this camp, I put him completely in charge.  I listened to everything he said and kinda put that trust in him.  So yeah, we’ll find out.  I think that it’s gonna pay off.  I feel good… I feel great… my mind is right.  All I gotta do is lose a couple more pounds (laughing).

You recently got married and welcomed another child this year.  What can we look forward to from Kendall Grove in the next year?  What are you planning for your fight career since you got released from the UFC?

Definitely one fight at a time.  Joe Riggs is first.  I respect him a lot as a person, as a fighter.  And just kinda looking at him right now.  But in the long term, I definitely wanna become a champion and I’m privileged that ProElite gave me the opportunity to fight for their organization… and maybe I can make some waves in this organization.  But that’s my long-term goal… and hopefully wear 10 pounds of gold around my waist by the end of this year.

If you win this rematch against Joe Riggs, who would you want to fight next?

It doesn’t really matter.   I’ve never, ever called out anybody.  I’m a fighter.  Whoever they want me to fight, I’ll fight um.  I know that we have a lot of good talent.  I know Drew McFedries is with ProElite.  I enjoy watching him fight cause he’s exciting.  He’s heavy handed… he punches hard… and maybe me and him can mix it up in the future.  If our paths cross, we’ll do it.  And whoever else ProElite signs at 185 and wants me to fight, I’ll do it.

Not only has Grove shown a lot of humility throughout his fight career, he’s proven that he brings 100% heart into each fight.  Da Spyder has a lot to prove on Saturday, not only to avenge his loss to Riggs, but to show the world that he’s grown since then, from a boy… now to a man.

I don’t doubt that there will be fireworks during this match.  We will be seeing an improved Grove with a strong mind and a new bag of tricks.  Riggs has also stated that he’s gonna come out swinging.  Either way, one of these men is going to walk away with a new lease on his career and the fans will end up walking away all feeling like they were the winners of the night.