For a first event, One Fighting Championship delivered. Victor Cui and his team had done a great job promoting and creating interest event without big name recognition aside from Phil Baroni. The fights were fast paced and exciting, with more than half ending in a finish.  With many the fighters coming out of multiple countries across Asia, the promotion was able to capitalize on developing new regional superstars through one event.  Here’s a breakdown of the fights.

As the main event of the evening, spectators were treated to a back and forth striking match.  Both fighters showed lots of heart as they each withstood multiple hard shots from their opponent.  This fight was a test of Folayang’s straightforward aggressive striking versus Kwon’s powerful counter striking. Although Kwon was able to break Folyang’s nose bloody up his face, Folayang was able to land more power strikes and control the pace of the fight to receive the judge’s nod.

It is not a coincidence that One FC had decided on putting a Filipino fighter as the main event.  It’s a no brainer to attempt to capitalize on the nationalistic fans of Folayang’s home country.  From the rise of Manny Pacquiao, the door has been open for fighters in any combative sport to have an instant and loyal following.  Win or lose, Brandon Vera, Mark Munoz, Nonito Donaire and even former WWE wrestling star Dave Batista have huge followings in the country of 94 million (plus another 11 million that live overseas).  Even in attendance at the Singapore Indoor Stadium, you could hear a huge pro-Filipino contingency each time one of their countrymen would hit the cage.  It is no wonder that the UFC has its eye on future events in the Philippines.

Baroni came out swinging, but Yoshida strategically used his judo to get the fight to the ground and control the fight and grind out a decision win.  Baroni’s large muscular body had once again hindered his endurance in the later rounds.

Both ex-UFC employees were in need of a win to build their records to enter another stint in a major promotion, so it’s understandable why Yoshida took a safe route in winning this fight.  Unfortunately for Baroni, the loss will be a huge set back as his record is 1-4 in his last 5 outings.  Hopefully he will find his grove again and we will see the Baroni of old, knocking out the competition in the NYBA way.

Both fighters came in undefeated. Chillson is best known for his punching power especially after his last one punch KO in his last fight.  Kelly is known for his submission prowess.  Even without any formal BJJ training, he’s finished all his fights by submission.  They both came out swinging, and Kelly was getting the better of all the exchanges.  Frustrated, Chilson attempted a single leg takedown against the fence, but left his neck exposed for a highlight submission by Kelly.  Kelly sunk in a rear naked choke from standing and choked Chilson unconscious.  Kelly is definitely one of the fighters to watch out for from this promotion as his submission style is unorthodox but, so far, highly effective.   Look to see more of this fighter from the Philippines in future events.

Although Gregor Gracie had dominated the fight on the ground, he was unable to submit the South Korean, Seok Mo Kim.  Gracie caught Kim early in what looked like a textbook rolling triangle from mount, but Kim unbelievably wriggled free from the catch.  By the end of the fight Kim survived 4 arm triangle chokes partly due to Gracie’s botch technique in applying the choke as Bas Rutten pointed out in his commentary.  Hopefully, Gracie will get back on the drawing board with his trainer, Renzo Gracie and work out the technique for next time.

Zorobabel Moreira had a huge reach advantage, which stifled the Andy’s pattented “stand and Wang” approach.   Wang was poked in the eye at the start of the fight and was able to land a few solid body shots but once recovered, Wang was taken apart in the clinch by Zoro’s elbows. Moreira even threw a spinning back elbow a al Jon Jones.  In the 2nd round, Wang was dropped by a flury of strikes, and was beaten in a turtle position until the ref stopped the fight.  Moreira looked extremely dominant, especially as he is a tall 155er at 6’3.  Hopefully OneFC will be able to find some decent competition for him who can deal with his length for this next fight.

The preliminary fights of the event showcased a few new comers to the Asian MMA scene. As you would expect with fights with little or no pro MMA fights, there was some big mismatches, but some big finishes.  4 of the 5 fights ended by KO or TKO.   Most impressive fighters of the undercard were Eddie Ng, Vuyisile Colossa.

Eddie Ng walked out to the cage with Lady Gaga’s “Born This Way” and wearing a Manga mask on half his face.  With this Confidence, Ng showed a great wrestling shot, submission defense and ground and pound in his KO win against Sanda fighter Yuan Chun Bo.

Vuyisile Colossa used his superior striking and size to dominate Xing Yu Ma.  The fight was huge mismatch as Ma could barley throw any strikes, overwhelmed by Colossa.  An interesting match for a future OneFC card would be Colossa Vs Ng as they both need a worth while challenge to further elevate their MMA stock.

The rest of the fight results: 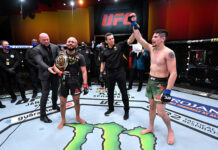