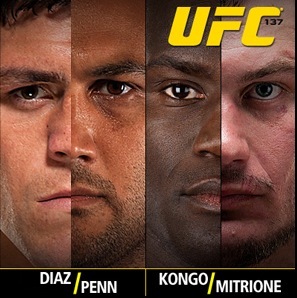 You would think that having two of Mixed Martial Art’s most respected fighters retire in one night is kind of a big deal.  Both Pride FC Grand Prix Champion Mirko “Crocop” Filipović and former lightweight and welterweight champion BJ Penn decided to announce their retirement this past weekend after both had been defeated at UFC 137.  On this night however, the magnitude of their decisions had been overshadowed by the excitement caused by newly crowned number one welter weight contender, Nick Diaz.  Time to break down what’s coming up next for the fighters of UFC 137.

It was a tough first round for Nick Diaz.  He was taken down and forced into a technical grappling match where BJ Penn was able to take Diaz’s back but a scramble ensued and they were able to get back to stand up.  Diaz wasn’t putting together the boxing combinations he was known for, and Penn was getting the better of the exchanges.  The second and third round however, was a different story.  Diaz was able to get into his rhythm and showed his trade mark high volume boxing, out-striking Penn more than 2 to 1 at 257 to 107 landed strikes.  Diaz looked comfortable, and smooth as he launched each combination and kept Penn guessing with his mixed bag of head and body punches.  In the end Diaz took the decision.  This was the most punished we had ever seen BJ Penn with an eye swollen shut and a black and blue face.

At the end of the fight Nick Diaz called out Georges St. Pierre who had pulled out of his bout scheduled for this same event due to injury, stating that he was faking his injury and he was scared to fight him.  With this accusation, and a solid win over one of UFC’s best in BJ Penn, Dana White decided to put the wheels in motion to producing the fight that everyone wants to see.  At the post fight press conference Dana stated that Carlos Condit has agreed to step aside and allow the Nick Diaz versus Georges St. Pierre title fight happen, most likely on Super Bowl weekend.

Like many fans, I am over joyed with this announcement.  I am a huge fan of both fighters and I believe that this fight will force George to prove he is a true champion as will not be able to coast to a positional win.  Diaz is dangerous and offensive in any position especially on the ground and his style will keep GSP from grinding from a top position on the ground.  The big question leading up to the fight is if Diaz can maintain “playing the game”.  Hopefully, Diaz has learned from his past mistakes and will be able to maintain his media obligations.  During fight week he was able to do so, so it looks like he got the message.

Also at the end of the fight, BJ Penn announced his retirement from MMA.  Do I believe him?  No, not really.  I think he may take a year off to focus on his family and live outside the strains and pains of training fight to fight.  Just like Randy Couture, he is going to see a fight and might think, “I could beat that guy who’s holding that title” and then have the itch to make one last run at it.  Plus, this December he will be turning only 33!  Some people don’t even start fighting for the UFC till they are past 33.  Even if I’m wrong, and we never see BJ Penn fight again, one thing is for sure.  He will be inducted to the UFC Hall of Fame and will always be celebrated as one of the sports greatest champions.

This fight didn’t go the way most of us were hoping for.  Someone didn’t get knocked out!  Instead, we were stuck with a classic heavy weight snooze.  Both fighters decided to play the counter puncher roll, and ended up circling, circling, circling and more circling.  However it is understandable why they were both tentative, as both fighters are known to hold KO power, and did not want to rush into a ill planned exchange. There was no one who really stepped up to take the lead in this dance until Cheick Kongo decided to pull a couple take downs in the later round.

With most of the top 10 Heavy weights either signed to fights or out injured, the fight I see making sense for Kongo is Roy Nelson, who also fought on the card.  Nelson was not afraid to push the pace even against a feared striker like Mirko Crocop, so he may do the same against Kongo, and give the fans a fight that they want.

As for Matt Mitrione,  even though this was not his best performance, I hope he continues on his quest on seeking the best coaches and developing his fight acumen.  For a man who only had 6 fights ,he was still able to hang with one of the UFC’s top 10, and is still growing into a well rounded fighter.  I cannot wait for him to further develop into his potential. I would love to see him fight Travis Browne as both fighters are light on the feet and love to throw big leather.

Roy Nelson def. Mirko “Cro Cop” Filipovic by TKO at 1:30 of Round

I was almost sure that this fight was going to get fight of the night until the Penn vs Diaz fight happened.  Both fighters went back and forth exchanging solid blows.  In the first round Mirko hit a strong upper cut that clearly marked the cheek of Nelson.  The punch snapped Nelson’s head back violently, and if it were any other heavy weight they would have been doing the stanky leg.

At the beginning of the second round, Nelson tagged Cro Cop with a punch that wobbled him into the fence.  as Nelson came in for the kill, he received a hard punch to the chin that caused him to cover up as Cro Cop followed up with a solid combination of punches, but was not able to land anything significant. The end of the round finished with Nelson scoring a take down into his bread and butter crucifix position, but was unable to finish his opponent before the end of the round.

Finally in the third Nelson was able to secure a back mount on the ground and pounded out Cro Cop to a ref stoppage.

For Nelson, this was a great victory.  He had noticeably lost weight and increased his strength and conditioning between his last fight and this one, and his hard work had been rewarded.  Hopefully he will continue this training leading up to his next fight.  As I mentioned earlier, a fight against Cheick Kongo would make a great match up, but as mentioned in his post fight interview, Nelson does have his eyes on gaining a title shot.  As shown explicitly in the weeks leading up to this card, anything can happen!

The retirement of Mirko Cro Cop was not a surprise on Saturday night as he had alluded to his retirement during the prefight press conference on Thursday.  Although he had only gone 4-6 in the UFC, Cro Cop will be most remembered from his time in Pride FC where his kicks became legendary. His most famous quote was “Right leg, hospital; left leg, cemetery.” He had kicked the heads off of most notable stars like Wanderlei Silva, and WWE super star Alberto Del Rio ( at the time he was fighting under the name of Dos Caras Jr.).  Like BJ Penn, Cro Cop will be much deserving of the UFC Hall of Fame honor.  Up next in retirement, Mirko plans to spend the time he was dedicated to in training back to his family and raising his children.

The long awaited debut of Jeff Curran to the UFC had been an unfortunate affair for veteran of 48 fights.  Scott Jorgensen was able to smother Curran’s BJJ with strong wrestling, and was able to control most of the stand up exchanges.  In the end, Jorgensen did enough to take the decision.

Jorgensen is now in a tough place as there is no easy fight to get back into title contention.  A rematch against Damitrious Johnson would be the quickest way back, but he was manhandled by Johnson who really should be fighting at fly weight.  Other than that, he would need to fight the winner of Faber versus Bowles.  If Faber does win, I could see Joe Silva making the match against Jorgensen, as it would be too soon for a trilogy match against Cruz.

For Curran, I hope he doesn’t get cut.  His performance wasn’t his strongest, and he is 4 and 6 in the last 10.  Hopefully he receives one more chance to prove himself.

The most anticipated fighter to come from Japan since Kid Yamamoto, Sengoku featherweight champion Hatsu Hioki had made his debut in the octagon at UFC 137. Unlike his Japanese counterpart, he was able to come out with a win versus a tough competitor George Roop.  Although it was a split decision, look forward to the next time Hioki makes a trip to the octagon as he should now be over the dreaded “Octagon Jitters.”

It had been said that if Hioki had an impressive first showing he may be next in line for Jose Aldo’s featherweight title, but it looks like he will probably need another opponent to impress the UFC brass.  A great test would be either Nam Phan or Leonard Garcia, both of which would push the Japanese fighter to his limits.

George Roop has now been 2 and 2 in his last four outings.  A winner leaves town match with once champion Mike Brown may be in order.