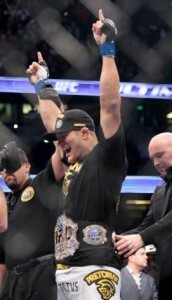 The numbers are in for UFC on Fox, and Junior dos Santos not only walked away with the UFC heavyweight championship, but the title of most watched fight in the history of the sport.

Kimbo’s previous records included headlining the most-watched MMA event for 2008’s “EliteXC: Primetime”, which had 4.3 million viewers and most-watched fight, which was his main event bout on that show against James Thompson. Kimbo also held the most-watched UFC fight record for the episode of “The Ultimate Fighter” where he squared off against Roy Nelson, that fight being viewed by 5.3 million people.

Dana White made a point of putting his best foot forward on the promotion’s network television debut, headlining the show with what could have been a legitimate pay-per-view moneymaker. The strategy has proven to be a resounding success, and one has to assume that there’s a lot of smiles amongst the Zuffa leadership today. There were some that questioned both airing a heavyweight title fight on free TV and the decision to only air only one fight on a one hour debut, but as they say – numbers don’t lie.

The decision was made to spend the first half of the broadcast on “UFC Primetime” or “HBO 24/7” like features on the backgrounds of the two fighters to familiarize new fans with just who Velasquez and dos Santos were and how they got to where they are. They also brought out Brock Lesnar, who is as big a name as any to those with only a passing interest in the sport, to give his opinion on the fight. Everything was being done to appeal to individuals who hadn’t seen UFC before to bring them up to speed and make them feel comfortable. The bloodstains on the canvas from the previous fights were even painted over before the main event began so as not to offend the more squeamish of these new viewers.

When looking at the numbers, the gambit has obviously paid off. Saturday night, UFC was up against two college football games on network TV and another on ESPN. Despite this, UFC came out well ahead in the key demographics of adults 18-34 and 18-49; as well as men 18-34 and 18-49. The Fox press release even noted that the UFC event drew more viewers in the men 18-34 demographic than any college football telecast this season except one, the #1 ranked LSU vs. #2 ranked Alabama game.

Dana White insists the Fox debut was just a “teaser” for what will come to the network when the deal begins in January 2012. While no one can question the success of the debut event, there can be lessons learned to bring the level of success even higher for round 2 on Fox. Firstly, while the video packages on the two fighters were well done, they did seem to go on too long. Almost forty minutes of the one-hour broadcast had gone by before we finally got to action inside the cage. Even for a new viewer trying to get caught up, that’s an awful lot of pre-amble for a broadcast that contains only one fight.

Secondly, the numbers show that people were more interested in the fight than anything else. A common solution to both of these issues would have been to show the Clay Guida-Ben Henderson fight which took place before Velasquez-dos Santos. The new audience may have loved to see the hyperkinetic lightweights do battle before giving way for the heavyweights. But like with any new venture, these things will likely be sorted out along the way as UFC and Fox develop their rhythm together.

I wrote in a previous column that Saturday night would be a good gauge of just where UFC is at in the mainstream. With PPV buyrates down, some had began to wonder if UFC/MMA was nothing more than a fad. Instead, the network television debut showed that the appetite for MMA is as high as it’s ever been, and those that blame the PPV slump on economic factors may indeed have more truth to what they’re saying then was previously thought. With a strong debut and more network specials to come, we as MMA fans may look back to Saturday as the day the game changed.