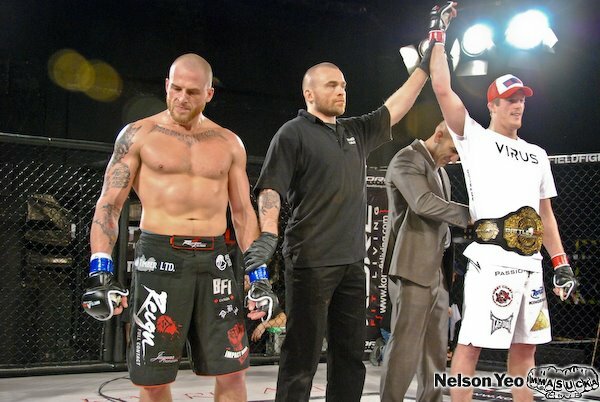 Battlefield Fight League 12 took place last night at the Vogue Theater on the Granville Street Strip with ten exciting amateur fights, and only one going to the judges.  The event was headlined by two intriguing championship fights featuring a rematch of current middleweight champion Micah Brakefield vs. Jer Kornelsen, and Brazilian Jiu Jitsu Black belt Leo Xavier vs. Capoeira expert Marco Caffiero for the vacant welterweight championship. As always, Battlefield’s crew did their magic behind the scenes to put together a great production with prefight interview videos, and a smoothly run show that enhanced the viewing experience.

Last May at BFL 8, Micah Brakefield and Jer Kornelsen had a closely contested match which showcased both fighter’s strengths in Brakefield’s wrestling and Kornelsen’s cardio.  In the end, Brakefield had won the fight via split decision, which gave reason to provide Kornelsen a rematch which went down last Friday night.

This time Brakefield had decided not to let the fight go to the judges.  The fight quickly went to the ground in the first round.  Immediately, Brakefield had thrown up a triangle attempt, and with some adjustments he secured the submission, and forced Kornelsen to tap at 1:10 of Round 1.  It was an entertaining and decisive win for Brakefield’s first middleweight title defense.

The co-main event was originally slated for David Kennedy versus WCMMA welterweight champion Saeid Mirzaei.  Unfortunately, due to injuries, both fighters had to pull out. Leo Xavier and Marco Caffiero stepped up to challenge for the vacant welterweight championship.  This was another chapter to the classic grappler versus striker saga. This time the grappler was victorious.

Xavier took the fight to the ground early with a beautiful single arm shoulder throw that put Caffiero on his back.  Xavier had some ground and pound from mount, but was rolled off by Caffiero.  From the bottom, Xavier transitioned into a armbar to finish the fight at 2:07 in the first round and to take home the welterweight belt.  Xavier displayed the beauty of Brazilian Jiu Jitsu in his finish and why he will be a tough challenge for any contender to his title.

-Kirk Tse puts Morgan Littlechild to sleep by a Triangle Choke at 2:10 of Round 1.  At only 17 years old, Littlechild proved to be a tough fighter in coming out with a frantic pace and not tapping to the choke.  Tse extends his unbeaten streak to 4-0 and should be a possible contender for the BFL featherweight title.

-JP Beaudreault and Hitam Treadwell were competing for the fastest KO of the night.  Treadwell scored a 19 second TKO on Joey Nicholson.  Not to be out done, Beaudreault KO’d Chris Hansen at 0:11 in the fight right after.  I would have to check the record books, but I think Beaudreault’s KO could possibly be a BFL record for fastest KO.  (I’ll go check with the BLF guys…)

Jordon Howes showed tons of resilience in his submission loss to Curtis Harriot.  Howes was ground and pounded for majority of the first round, but was still coming forward when they were back on their feet.  Harriot mixed his kicks well in his stand up arsenal. Hope to see more of both fighters in the future.

-Catch all the events official results here on MMAsucka.com and to check out our BFL 12 event pictures “like” us on Facebook and check out our albums!