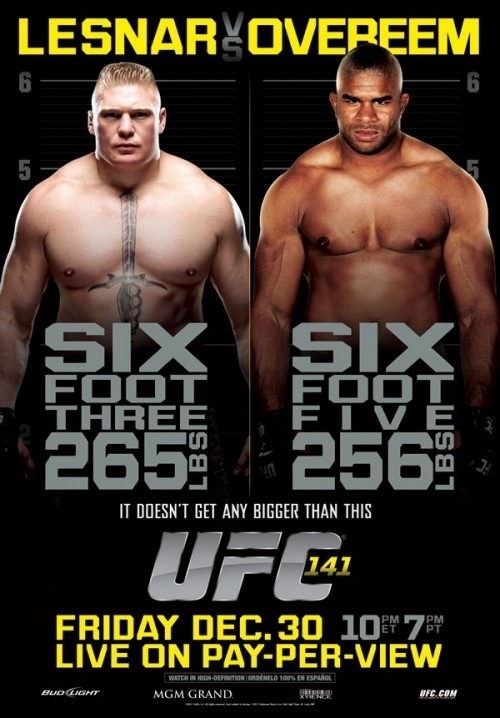 The UFC is holding their media call for UFC 141: Lesnar vs. Overeem today (Dec.19). On the call will be heavyweight headliners Brock Lesnar and Alistair Overeem.

Partial highlights from the media call below (thanks to MMANation.com)…

-“I’ve had to deal with the same (drug) accusations my whole life. Being part of the spotlight… it’s part of the lifestyle. It comes with the territory. I’ve been used to it for many years. I haven’t really been following what’s going on with Alistair.”

-Been able to work on evolving and get better since the layoff. Focusing on sparring and Jui-Jitsu. “We’ve put lots of hours into the Octagon in training.”

-Not paying attention to the outside noise. Happy to stay on his ranch and focus on his family and training.

-Being around the UFC on Fox arena reenergized his passion for competition.

-“I feel good. You just need to roll with the punches and adept.”

-In hindsight, you have to take the good with the bad. Can’t change the past. You live with your decisions.

-Expects the fight to end sooner than five rounds.

-Doesn’t matter that he is the underdog. At the end of the day, both he an Alistair’s intentions are to win.

-Plans to spend holidays in Minnesota but doesn’t know when he’s heading to Las Vegas.

-Is “actually feeling good” this time around, as opposed to his last return to action.

-Getting annoyed at all the questions about his health.

-Is happy for Junior dos Santos and believe someday he’ll get his second chance.

-Tony Ferguson is a “great kid”. Is glad that he was able to overcome all the obstacles and find success in the UFC.
“I wish him the best… he’s a very hungry fighter, and I am as well.”

-Hasn’t looked ahead to a title shot because he can’t overlook Alistair.

-Tried to keep the past week as basic as normal with training. Took a quick trip to England to take the NSAC commissioned drug test.

-“Everybody has the right to ask whatever they want. And I have the right to answer or ignore… I simply don’t have the time to get into all these allegations.”

-Doesn’t discuss his training and training partners, but feels good mentally and psychically. Sparring with a slew of accomplished wrestlers.

-“I’ve fought on this stage before… I don’t really see it as pressure.” Enjoys the larger fights with increased media attention. The bigger, the better.

-Preparing for five rounds, but doesn’t expect it to last that long because both men are “aggressive”. Doesn’t see it going past the second-round.

-Not worried about distractions. “It’s all about adaptation. I’m good at that, I think.”

-Considers himself an “all-around fighter”. His striking got better because of K-1, and prefers knockouts over submissions, but still can roll with anybody.

-K-1 fighters don’t clinch, so they’re a little more relaxed on the feet. With MMA, you have to make adjustments in every aspect. K-1 is much more simple.

-Holland is more about strikers and Japan has “crazy submissions”. Is happy to have fought everywhere to make himself into an all-around fighter.

-Thinks this is a “dream match”, both for himself and fans.

-Believes he would have the upper hand over Junior dos Santos in the striking game. “I’m looking forward to fighting him after Brock.”

-Wants to add the UFC title to his collections. It’s the “only thing I have left to achieve.”

-Trains to house/trance music in Holland. Has no idea what the artists’ names are.

-Has gone through a “roller-coaster ride” this year. Credits his team for being his “rock” and letting him focusing on training.