Today, rumors became facts as the NSAC confirmed that Nick Diaz did test positive for marijuana at UFC 143. This is the second time that Diaz has tested positive for weed in Nevada. The last time was Feb. 24, 2007, when Diaz defeated Takanori Gomi at a PRIDE Fighting Championship event held at the Thomas & Mack Center in Las Vegas.

There was another instance when Nick Diaz refused to do a CSAC drug test prior to a Strikeforce title match with Jay Heiron in California back in 2009. The match was scrapped and Cesar Gracie was left to explain Nick’s actions. That seems to be the common theme through out Nick Diaz’s career. 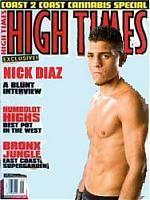 It’s a well-known fact that Nick Diaz is big proponent of marijuana use. I’m sure there are many people who enjoy a nice joint or hit from the bong. It also helps with keeping one calm or deal with social anxiety from what I hear. However, marijuana is illegal in most states and provinces. It is also a banned substance when it comes to MMA. Sure there are many people who are asking how marijuana is considered a performance enhancing drug (PED)?  It might enhance watching TV or Sex but how does it help one in a fight?

What people need to realize is that marijuana is banned because, although you may not think it’s an enhancer, it’s banned because it can put a fighter’s life in jeopardy. It’s the same reason why you can’t operate heavy machinery or drive a vehicle under the influence.  MMA is a dangerous sport, so anything that could slow down reflexes or cause any sort of distortion puts a fighter’s life in jeopardy.

Now,  let’s be honest, weed has different effects on people. Sure you can get the munchies and feel the urge to clean your house, but there are enhancing qualities in marijuana that could help any athlete. It can make you numb to pain, it can help you focus, and it can help calm anxiety and nerves. So, please don’t argue about how it’s not an enhancer because that is a general statement that has no real validity to it.

Society has a lot of grey areas and even though I agree that marijuana should be legal just like alcohol, I do agree that it should be a banned substance within sports. If you are a professional athlete you are responsible for what you put in your body. I don’t know how many times this has been preached over the last two decades. Whether Diaz smoked before or after his fight is pointless. The fact of the matter is he keeps breaking the rules. The question I have is where are the “NO” people in Diaz’s life?

I point my finger at Cesar Gracie who time and time again comes to the defense of Nick Diaz instead of being a better trainer, role model and manager. Diaz is one talented SOB who is one of my personal favorites in the sport. I like his candor, I like his skills and I love the fact that he is who he is. However, there has to be a line in the sand between personality and professionalism; something that the Cesar Gracie Fight Academy and Nick Diaz haven’t figured out yet.  When does the bad boy routine wear thin?

Whether it is in cage brawls, no showing press conferences or smoking banned substances, somebody needs to take responsibility. The first person is Nick Diaz himself but for some reason we have seen this movie far too many times to think he is capable of taking charge of his career. Cesar Gracie continues spewing out spin and defending Nick at every turn which is no way to be a manager and confident. When does professional accountability come into play?

A banned substance is a banned substance and Zuffa and the UFC need to start cracking heads and making bold statements. Cyborg Santos was caught cheating by using a PED and she was stripped of her title and because of that the entire Strikeforce women’s 145lb division is now in jeopardy. Nate Marquardt was cut from the UFC for failed medicals for high levels of testosterone when he engaged in hormone replacement therapy.  The list goes on…

Lately the UFC has been tough on fighter’s breaking the rules but in the past they have also been very inconsistent. Although Dana White says things are done on a case by case basis, you have to believe that this puts the UFC in a precarious position. They had plans on a money making rematch between welterweight interim champion, Carlos Condit and Nick Diaz. Now all of that has gone up in smoke.

Diaz will most likely get suspended for a year, but in my humble opinion the UFC should throw the book at Nick too. This is not the first time at the rodeo for Diaz and company executives. Before Diaz landed in the UFC for the second time, he was tearing it up in Strikeforce. Dana White went on record by stating that the UFC would love to have him back, as long as he played “the game.” So far Nick Diaz has failed at more than just a drug test.