Maximum Fighting Championships 33 – “Collision Course” took place at the Mayfield Trade Center in Edmonton Alberta last week. Unfortunately, unless you were there in attendance nobody in Canada had the opportunity to watch it live on television. You have to believe that MFC took a bit of a hit in the ratings department. For a promotion that has claimed to be the biggest in Canada, they can’t be too excited about not being able to have Canadians watch their live fights. […]

HDNET is the home of Maximum Fighting Championships but for some reason cable providers across Canada axed the HD channel from their lineup. To be honest though, there really wasn’t much quality content on the channel except for their mixed martial arts programming.

Rogers apparently replaced HDNET with FX Canada which isn’t bad for MMA fans because that will give you some more UFC content, but to be honest, you were already getting that on Sportsnet. Nobody at Rogers could give me a direct answer on why they cut HDNET, but from what I gather they are telling their customers that it was a “business decision.”  So sleep easy with that great explanation.

Back in January,  Bell had issues with HDNET and an apparent contract squabble. So what is Shaw Cable’s excuse? Apparently similar to Rogers it was an apparent business decision. You have to love the corporate explanations to their paying customers.

What I was able to find out is that Shaw is thinking about replacing HDNET with a new channel called AXS TV. An unnamed Shaw employee told me that they are going to try the AXS TV out and see if it’s worth the money (Carriage Fee). People forget that your cable provider has to pay and negotiate the terms for the channels they provide. 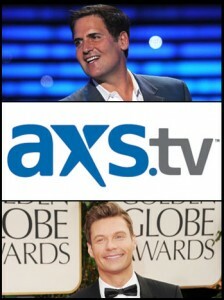 The word on the street is that HDNET is done as of this Summer. According to many, the channel is looking to discontinue and rebrand itself. So is this new AXS TV going to be the new HDNET? See how I’m connecting the dots?  Yes it’s true. AXS TV will be the replacement. Ryan Seacrest, along with AEG (biggest music promoter in world) and CAA (biggest talent agency in world) bought into HDNet. Now will it still show MMA? I’m not sure, but you have to believe that their highest ratings came from mixed martial art fans and you wonder if the contracts that HDNET had with regional promotions have to be honored?

I spoke to MFC President Mark Pavelich and this was his statement on the situation. “It’s unfortunate for the time being but with a brand-name change coming to HDNet this summer we’re hopeful and excited about being televised live in Canada again. In the meantime we’re very happy with HDNet being live throughout the USA and of course our agreement with TSN2.” Notice he used the word “hopeful?”

Now you know…and knowing is only half the battle.

For full MMA coverage and the latest news, keep it locked to MMASucka.com. You can also follow Trevor on Twitter @tdueckmania.