I was very excited to be given the task of reviewing the movie “The Hammer” for mmasucka.com because I’m a huge Matt Hamill fan.  I love seeing decorated wrestlers make a successful transition to MMA, especially the way Hamill accumulated a impressive10-4 professional record.  The wins include a decision over former UFC light heavyweight champion Tito Ortiz, and a head kick KO of the night of UFC middleweight contender Mark Munoz.

Most extraordinary of all, he accomplished this without the ability to hear.

The movie “The Hammer” is about the journey that this remarkable deaf athlete had taken en route to becoming a successful MMA fighter, and more importantly, a beacon of hope for those looking to overcome adversity.  Here are some reasons you should watch this movie: 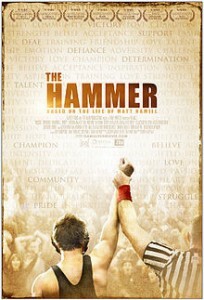 I put this movie in my collection of movies that I watch to be inspired.  In this pile I have Rudy, Miracle, and Braveheart.  It’s the kind of movie that you want to watch when things are tough and you need to give your head a good scrub out of negative thoughts.

Seeing Hamill win when the odds are against him gives you hope, especially since you know this story happened in real life. Also compared to the other movies, his story happened recently so it’s more relevant.

If you’re an MMA fan…

Its always interesting to know about what makes a fighter tick.  That why shows like UFC Primetime and Boxing’s 24/7 are great shows. The Hammer reveals how Hamill did not use being deaf as a crutch, but instead used it as a tool to bring hope to his school and to the deaf community.

Also, it’s refreshing to watch a MMA related movie that has some substance.  It’s not some cheesy recycled 1990s martial arts movie storyline about revenge with implausible fight scenes.

If you want to learn about the deaf…

The movie does a great job in bringing a better perspective to what people in the deaf community have to deal with in their day-to-day lives.  Each individual needs develops special skills like sign language and lip reading that help them function as contributing people in society.

Personally, I was ignorant of a lot of what deaf people go through, and I am still learning about it, but the movie has at least given me awareness of how they live.

After watching the movie, I wished that Matt Hamill was still fighting for the UFC.  He always brought the crowd to their feet with his warrior attitude and delivered some of the most inspiring performances ever to grace the octagon.

Make sure to pick up “The Hammer” now on DVD! If you want to keep up to date on whats going on with Hamill, check out his website http://www.matthamill.com/, and follow him on twitter @hammerufc.