We are introducing a new segment on MMASucka.com called Punch Out. Two Sucka writers will debate a topic or two and go three rounds of debate if need be.  Sometimes they will agree, sometimes they will disagree, but in the end the debate rages on. So let’s introduce our first two combatants. It’s Dueck vs. Bardsley – expect both men to come out swinging. Each man will express their opinion on the subject and after respond to their opponent’s shot. There are no rules, no Octagon, just a good old fashion beat down. You ready? You ready? Let’s get it on!

They are stuck in purgatory or in an alternate universe. What in the hell is Zuffa and Showtime doing? It seems to me there are internal disagreements on philosophy. Dana White walked away, so that should have been a red flag a while back. Whoever is running the show needs to be fired. Are they a stand-alone organization? Or are we just delaying the obvious death? They have no depth, no real star power and Bellator is eating their lunch. They need to strip this organization down, and instead of showing top talent on a reality show (TUF) that nobody watches, put guys in Strikeforce and start building stars of tomorrow. There seems to be no real clear direction. If Strikeforce is going to be a Zuffa toy…use it. Otherwise please put it out of its misery. Here is an idea, how about doing what goes on in the UFC video game and use Strikeforce as a way for guys to make it to the big show.

Relevant is a tricky term. Compared to every MMA organization in the world not named UFC, sure they are. Compared to the day before UFC bought them? Not so much. As long as UFC keep siphoning off every piece of talent they have, Strikeforce will be doomed to a second tier or lower existence. But the upshot is that despite the lack of a cohesive promotional strategy, they are still putting on great shows. Saturday night’s event not only eclipsed Bellator’s show, but was also hands-down more entertaining than UFC’s Fuel TV card earlier in the week. If Scott Coker can continue to make exciting match-ups and showcase the promotion’s new biggest star in Ronda Rousey, there’s no reason that Strikeforce can’t carve out a new niche for itself and remain destination programming for MMA fans. 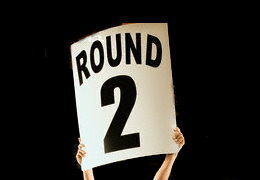 So what you’re saying is Ronda Rousey is the only reason to watch Strikeforce? Besides the Cormier vs. Barnett fight that we just witnessed, Ronda Rousey is the second reason to watch? Are there any other fighters or guys to get excited about in Strikeforce that are not named Gilbert Melendez or Ronda? I tell you that Nate Marquardt, Tyron Woodley Main Event  seems like a real barn burner. zzzzzz. They lack depth and promotion. Yes Strikeforce 40 was exciting, but the heavyweights are being shipped off, and it will be just a matter of time before we see Gilbert Melendez finally make the move to the UFC. Strikeforce needs young and exciting fighters to promote. Why does the UFC need over 300 fighters? So guys can fight once a year? It’s time to take Strikeforce and build a promotion with some depth so that they can build up divisions, reconstruct careers or build stars. They have a kid named Ryan Couture that would be a great starting point. Like I said Strikeforce has a couple of pieces, but they could use some star power. Nobody believes Strikeforce executives when they say they are not a secondary brand. They are. Why not add some UFC talent to the Strikeforce roster? I’m sure guys like Dan Hardy, Melvin Guillard, Rich Franklin, Thiago Alves, Rick Story, and even George Sotiropoulos would fit right in on a Strikeforce card. Put guys who need to rebuild their careers in Strikeforce and mix them in with some great young talent. All of a sudden you have yourself a promotion with some stars with name recognition and some up and comers. If that happens, Strikeforce becomes a legitimate organization but at the same time a  farm system for the UFC. Makes sense to me.

As long as Strikeforce is under the Zuffa umbrella and Showtime wants them on their network, they’re not going to be number one or even 1A. Their situation isn’t unlike a Bellator or a Titan where anyone at the highest level is going to get scooped up by the UFC eventually. But I’d caution against using the term “irrelevant”. Having the top women’s fighter in the world contains relevance all by its lonesome. Rousey is one of the hottest (literally and figuratively) properties in the sport today. With Dana not wanting women’s MMA in the UFC, Strikeforce is her platform to become a national star and also to bring notoriety to the Miesha Tates, Sarah Kaufmans, and Alexis Davis’s of the world. Beyond the women’s division, the organization still contains great fighters such as Luke Rockhold, Tim Kennedy, Rafael Feijao, Robbie Lawler, Jacare Souza and the list goes on and on. If a fan can’t get excited about an MMA show with that kind of talent on it, perhaps they should stick to UFC and UFC alone.

Besides women in Strikeforce there really isn’t anyone to get too excited about. Those names you listed off to me aren’t going to get the casual viewer to watch or buy a ticket to a Strikeforce event. Sure the hardcore fans will watch, which was clearly the case by the low attendance at Strikeforce 40. Not to mention the low ratings. Hardcore fans are not going to keep a fight league like Strikeforce a float. You forget that it’s a business, and there is no way Srikeforce is making money right now. Eventually Zuffa is going to have to make a major effort to improve things or just continue to let it die. People enjoyed Strikeforce becasue they had some great talent in Diaz, Melendez, Shields, Overeem, the list goes on. There is no marquee fighters in that organization that you can market or get excited about. If there is, Strikeforce has done an absolutely horrible job of marketing their talent. Ronda Rousey is really the only one and that has been mostly due to her getting out there and creating a stir. How long do you think the women’s division will last in Strikeforce? Either start making Strikeforce relevant or continue to the run the organization as a #3 in the world of MMA because they are not even a #2 anymore…and that is a sad state of affairs. Like I suggested in round two…spread the wealth or take the organization off life support and move on.

We’re going to continue to disagree on the definition of relevance. If the only way a promotion can be relevant is to compete with the UFC, than no other promotion in the world is relevant. The women’s division will last in Strikeforce as long as Showtime wants it to; based on the Tate-Rousey numbers which saw almost 500,000 viewers tune into the premium cable network for it, and improved more than 100,000 viewers from the previous Strikeforce event, it’ll be around for as long as the promotion continues to exist. Those numbers trounce what Bellator is doing by a wide margin, despite Bellator being on basic cable and Strikeforce being on premium cable. The fact is even with their dwindling roster, Strikeforce continues to put on wildly entertaining shows like the one we saw on Saturday and as long as there are great fights to be seen, people will want to see them.

I understand what you mean when you say the fights are entertaining, however, I’m not talking about a few entertaining fights every three months. I’m talking about Strikeforce as a business. When you only have a couple thousand people show up to your show in an arena that holds almost 20,000…that is a problem. It also signals that Strikeforce is no longer relevant in the  casual MMA fan’s eye. They don’t have a draw. What they need is to do is add more talent, do a better job of marketing that talent and make all the weight classes intriguing again. I never said that Strikeforce has to compete with the UFC; nobody is going to do that. But what Strikeforce can do is build itself up to where it’s competing with Bellator, Titan and even MFC. Be relevant again as a business and a stand alone promotion. Strikeforce is on life support. I agree with the sentiment out there that the only reason Strikeforce exists is because Bellator will be on SPIKE TV and Zuffa would like to have Strikeforce take a spot up on Showtime so that Bellator doesn’t get any ideas of doing an occasional show on the Showtime Network.

So after Trevor threw out some bombs that seemed to rock Carlin in the second round, this fight is going to go to the judges score cards. Judge Jeremy Brand scores this fight 29-28 and the winner is by unanimous decision is Trevor Dueck.