The biggest grudge-match of the lighter weight classes had the UFC’s marketing machine behind it in full-force this year, as Dominick Cruz and Urijah Faber were opposing coaches on the first live season of The Ultimate Fighter. Following the season the two were set to embark on their rubber match to determine the top dog at 135-pounds.

As things have gone recently in the UFC’s over-crowded fight calendar, the injury bug struck again forcing Cruz to sit on the sideline for a while and California’s favorite fighter was left without an opponent.

The announcement was to be made on the hit reality television series that was making its debut on the FOX’s sister-platform FX. This was where the situation got a little messy – UFC President Dana White told four fighters that there would be a good chance of them fighting the ex-featherweight kingpin to keep it a surprise.

Faber was told that Menjivar would be his opponent, a rematch from their 2006 battle in the TKO organization based out of Canada. Faber then later told news outlets of his displeasure at the UFC Figurehead for not telling him the right opponent until the announcement was made on live television but it didn’t phase Menjivar.

“No, no, wasn’t upset, first off I was fighting [Renan] Barao but he helped out when the injury happened with [Urijah] Faber and Dominick Cruz – Injuries happen, the good thing is I’ll be on the card and a part of the show in July, that’s most important to me.” He stated.

Due to a rushed case of mixing and matching “The Pride of El Selvador” has another interesting dance partner at UFC 148 in Dominick Cruz’ friend and training partner Mike Easton. The dual-black belt has notched two-straight wins in the UFC  and looking to run up the 135-pound ladder, but Menjivar isn’t ready to be a stepping stone.

“All the guys in the UFC are dangerous and we are at this high-level in the sport so there are no more easy opponents in the UFC now, I’m training hard just like I will for anybody, everyone’s for real here so you have to prepare” He told MMASucka.com

Training down at the Tristar Gym he gets to train with a series of talented fighters and trainers that knock him into shape and get him fully prepared to go to battle with this once beaten rising star.

“I was really lucky here, in the last month I have had friends come to train with us, a lot of good guys, good wrestlers to take me down, knock me around and get me ready [laughs] they kick me, throw me and I get better as a fighter in these past two months training.” He said.

Menjivar has only tasted defeat once while fighting at bantamweight. For most of his career being under-sized in a time where there weren’t eight weight-classes to choose from, he perfected his craft fighting at welterweight, even touching paths with UFC title carriers Matt Serra and George St-Pierre.

Now that he is fighting at his home weight with a world of experience behind him at 30-years-of-age it is his time to fight his way to a championship to validate his years of dedication. Someone he might run into is Faber, who he expects is nothing like when they met in Quebec, Canada years ago.

“We’re two different fighters now – We both have more experience, that was a fight at 145 [pounds] I remember and we’re not the same now, we’ve grown up and both had a lot more training in the sport so it would be just like fighting another guy.” He says.

The Canadian-Salvadoran fighter is always the nicest person at the dinner table, even if he does punch people in the face for a living and where most fighters explain that they want to hurt their opponents, Menjivar tells us the opposite. 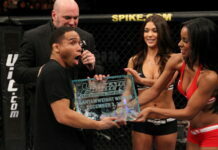 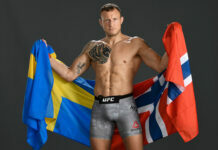