Rich Franklin put on an amazing performance against Wanderlei Silva at UFC 147 in Brazil. He used great footwork and speed to outpoint his opponent en route to a judges unanimous decision victory.

Late in the second round Silva hurt Franklin and almost finished the fight, however Rich was able to persevere and get back to his game. He mixed this up using some stellar footwork, jabs and from the looks of the photo below, some serious kicks.

Almost a week & this thing is still swollen & bruised from kicks! 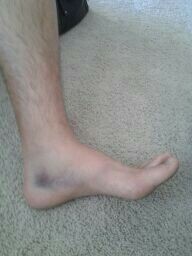 No word as to when the former middleweight champion will return to action, but look for him to face off against a top 5 opponent for his final run at the title.