Tito Ortiz said goodbye to the sport and company he helped build on Saturday night, losing a decision to Forrest Griffin. He leaves a legacy of being a UFC Hall of Famer, one of the sport’s biggest PPV draws and most dominant champions.

Ortiz burst on to the scene at UFC 13 all the way back in 1997, defeating Wes Albittron before losing to Guy Mezger back in the days where fighters would fight more than once in a night. The fight with Mezger opened people’s eyes, as Mezger was already a respected veteran by that point, and had Tito’s inexperience and enthusiasm not had him charge directly into a guillotine he may have walked away with the victory.

The Mezger fight also began Ortiz’s long-running feud with the members of Ken Shamrock’s Lion’s Den. After defeating Lion’s Den alumnus Jerry Bohlander, Ortiz donned a t-shirt proclaiming “I just f—— your ass”, which began his habit of t-shirts taunting his opponents.Ortiz took on Mezger again, this time winning via TKO. After the fight, Ortiz flipped off Mezger’s corner, which included Shamrock. Ortiz also adorned a t-shirt after the fight that proclaimed “Gay Mezger is my bitch”. Ortiz’s moniker of “The Huntington Beach Bad Boy” seemed appropriate and the controversial fighter was on the rise.

The victories over the Lion’s Den crew and amount of hype surrounding him put Ortiz into a UFC Light Heavyweight (then Middleweight) title fight against Frank Shamrock, Ken’s brother. Despite having top position for much of the fight, Ortiz wore himself out and the smaller Shamrock was able to gain the advantage and put Ortiz away in round 4. But Shamrock left the UFC after the fight, which meant Ortiz would get another opportunity at the title.

The gold finally took its home around the waist of Ortiz after Tito was able to outlast Wanderlei Silva in a five round contest held in Tokyo, Japan. He then went on to defend his title five consecutive times, including a vicious slam KO of Evan Tanner that lives on in highlight reels. The five title defences are a record for the UFC Light Heavyweight division that stands to this day.

But the most notable of those defences came against none other than Ken Shamrock. After leaving the sport in the late 90’s to try his hand at the WWF, Shamrock returned to the UFC to take on Ortiz for his title and settle the feud that had gone on between Ortiz and the Lion’s Den. The fight, held at UFC 40, smashed the UFC’s live gate and PPV records and cemented Ortiz as the poster boy for the promotion, as Shamrock’s corner threw in the towel after being brutalized for three rounds.

The aftermath of the Shamrock fight also became the first strain in the fractious relationship between Ortiz and Dana White. After seeing the business that UFC 40 did, Ortiz decided the time was right to renegotiate his contract, which led to his first holdout from the promotion. White was furious, and decided to create an interim Light Heavyweight title which was decided in a fight between Randy Couture and Chuck Liddell, the latter of which Ortiz was accused of ducking. When Couture upset Liddell, Ortiz announced he was coming back to the UFC to merge the two titles. In what was considered an upset at the time, Couture dominated Ortiz for five full rounds and became the undisputed champion.

Despite the lack of a title, UFC decided to put Ortiz and Liddell in the main of event of UFC 47. Bad blood had brewed between the two, with Liddell saying Ortiz was scared to fight him and Ortiz claiming the two former training partners had an agreement to never fight. Liddell handed Ortiz his second consecutive loss, while UFC 47 did the largest PPV buyrate since UFC 40.

After getting back in the win column with victories over Patrick Cote and Vitor Belfort, Ortiz again went to the sidelines to renegotiate his contract. This time, Ortiz remained on the sidelines for eighteen months while the Ultimate Fighter boom took the sport to new heights. His comeback fight was against the face of the TUF boom, Forrest Griffin. Ortiz defeated Griffin in a thrilling split decision battle that set another PPV record for the UFC.

As part of the terms he had reached with White, Ortiz was set to continue his rivalry with Ken Shamrock as coaches of season three of The Ultimate Fighter. The show painted Ortiz as a hard-working coach who cared about his young fighters and created more of a “good guy” image for the man known as the “Bad Boy.”  The season broke ratings records for the series in the 18-34 and 18-49 demographics.

The Ortiz-Shamrock rematch took place at UFC 61 and was aptly titled “Bitter Rivals.” Ortiz dominated Shamrock and referee Herb Dean stopped the fight in the first round as Ortiz was pummelling a defenceless Shamrock with elbows. The event again smashed PPV records, doing an incredible 775,000 buys but was not without controversy. Shamrock claimed the fight was stopped prematurely and demanded a third fight. Dana White elected to air the third fight on Spike TV which again set viewership records as 5.7 million people tuned in for the main event. Ortiz again stopped Shamrock in round one and set the stage for a rematch against Chuck Liddell for the UFC Light Heavyweight title.

Ortiz-Liddell 2 was held at UFC 66 and shattered the live gate record by over two million dollars. The event was also the first UFC PPV to do over one million buys. Ortiz came up short in his bid to regain his former title, but the event established that Liddell and Ortiz were by far the two biggest names in the sport.

Tito fought twice more on that UFC contract, going to a draw with Rashad Evans and losing a decision to Lyoto Machida. But his relationship with White was as contentious as ever, the two had planned to box each other for charity before that fell apart. Ortiz also infamously wore a t-shirt to the UFC 84 weigh-ins that proclaimed “Dana is my bitch!”  After Ortiz’s contract expired, he made noise about joining rival fight promotion Affliction, even appearing as a commentator for one of Affliction’s events. But the rumoured fight with Renato “Babalu” Sobral under the Affliction banner never came to fruition and Affliction closed its doors soon afterwards.

Being on the sidelines again for over a year, Ortiz finally reached a deal to come back to the UFC, which had to be negotiated through Lorenzo Ferttita due to the continued tension between Ortiz and White. His comeback fight headlined UFC 106 against Forrest Griffin which again went to a split decision, this time in favour of Griffin.

After dropping a decision loss to Matt Hamill, many observers speculated that Ortiz’s career was through and the legend had nothing left to give. His fight against Ryan Bader against UFC 132 was to be the death knell for Ortiz’s UFC career as Bader’s youth and explosiveness would be too much for the aging veteran. But Ortiz proved all the naysayers wrong, dropping Bader with a punch and submitting him with a guillotine choke in the first round. Ortiz had shown that he still had relevance in the sport.

It was around this time that Ortiz underwent a complete lifestyle and image makeover. He changed his nickname to “The People’s Champ” and embraced positivity in his life, even going so far as to repair his relationship with White. Ortiz seemed to accept that his career was on the downslope and wanted to cement his legacy as a respectful and respected veteran of the sport rather than the brash, obnoxious image that he maintained while in his prime. 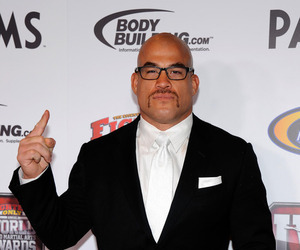 Ortiz never tasted victory in the UFC again, but two of his last three fights earned him a “Fight of the Night” bonus. He leaves the sport with the most all-time fights under the UFC banner and the most cumulative time competing in the octagon. He is also one of its biggest all-time box office draws and the newest member of the UFC Hall of Fame.

His influence outside the cage is felt just as much. Ortiz was one of the first business-savvy MMA fighters, with his successful branding of his Punishment Athletics clothing line and gym Punishment Training Center. He also showed how important image is in MMA, cultivating a persona that made people either really want him to win or lose. In that way, one can trace the popularity of Chael P. Sonnen’s persona back to Ortiz.

Ortiz had a truly remarkable career and achieved many things that may never again be duplicated in the sport. It’ll be a little strange not having him listed on the card for any upcoming UFC events. He was a pioneer, a visionary and a fierce competitor. Thanks for the memories, Tito.