The Filipino Wrecking Machine blasted his way through middleweight ranks with four consecutive victories inside the Octagon. Mark Munoz has one of the most impressive records in the UFC, with 7 victories, and two losses (one of them via split decision to Yushin Okami). In his last fight, Munoz defeated Chris Leben with a vicious ground and pound, in a fight that headlined UFC 138 in Birmingham, England. 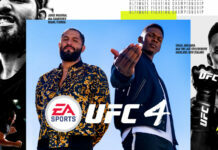 EA UFC 4 – Fighters Who Missed Out