Literally days removed from the biggest event on the Ultimate Fighting Championship’s calendar, they were back on the horse for an overshadowed mid-week card that delivered action in hoards.

The partisan crowd in the HP Pavilion in San Jose, California became restless towards the end of the first frame after a top-heavy wrestling performance from the Serra-Longo product but moments into the second frame he caught Munoz coming in with a brutal elbow that rendered him close to unconscious, following by relentless ground-and-pound to put the nail in the coffin.

The ascent up the 185-pound ranks for the “All American” stand-out is already being compared to the move through the division that light-heavyweight king Jon Jones made years prior and it’s hard to deny the comparisons with two twenty-something high-level athletes advancing at expediential rates to become challengers.

Weidman is unquestionably “in the mix” to steal a phrase from UFC figurehead Dana White and can make a serious claim to being next in line to challenge Anderson Silva for the throne atop of the middleweight division with the consensus best two fighters below him falling in the past four days.

To cement his place atop of the division matching him with the winner of Tim Boetsch and Hector Lombard will be a serious test for the 28-year-old prodigy.

James Te Huna didn’t just beat ex-heavyweight slugger Joey Beltran tonight in San Jose, he mercilessly punished him stringing together fierce, power-shots that had the returning fighter on dream street more than once.

The Australian has silently chipped away at a respectable 4-1 record inside the UFC with the lone setback to top-ranked Swede Alexander Gustafsson and is a fighter that needs cage time more than anything right now.

We were originally supposed to be treated to Aaron Simpson meeting former UFC welterweight title-challenger Jon Fitch but an injury sidelined the AKA product leaving the door open for Kenny Robertson to join the fray.

While Robertson had moments of promise, Simpson proved to be the bigger, stronger wrestler forcing the fight to the floor on numerous occasions and not giving the returning UFC vet room to breathe.

Naturally, the fight that was supposed to be in the place here is where we should go to next, Fitch is coming off the first setback of his career since his UFC 81 defeat to welterweight king George St-Pierre and Simpson creates a series of problems for him to overcome.

Francis Carmont has been a prospect to watch for quite some time, and he added a full tank of fuel to that fire tonight with his dominate performance against Czech Republic’s Karlos Vemola stopping him with a rear-naked-choke in the second frame.

The Tristar product is unbeaten in his last eight outings, including three inside the UFC and is certainly a taolent to watch, a sturdy test like The Ultimate Fighter vet CB Dollaway would be appropriate at this point and time.

Dollaway just notched his biggest win to date defeating Bully Beatdown star Jason “Mayhem” Miller and has an interesting bag of tools against to match against the French-Canadian. 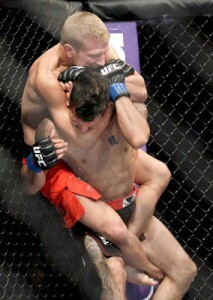 T.J Dillashaw just passed another of his post-Ultimate Fighter tests with flying colors, this time taking a page out of his opponent’s book, submitting the British submission artist with a neck-crank while on his foes back in a standing position against the cage.

Dillashaw, a Team Alpha Male stand-out has continued to impress since a great showing on The Ultimate Fighter and just needs to keep racking up wins on his tally and putting together an impressive resume.

A match with fellow 135-pound prospect Edwin Figueroa would be a great fight at this stage, not only would we expect fireworks but it would determine where both sit in the division.