Japan’s DEEP promotion had an event this past Saturday, titled ‘Tokyo Impact’ which took place in Differ Ariake, Tokyo.

The event not only showcased Mixed Martial Arts, but also a ShootoBoxing tilt between former PRIDE and UFC veteran Akihiro Gono and ‘Kid HMC’ Sage. The former won that bout via a decision, and a ShootoBoxing career may be on the horizon for the retired MMA competitor following his defeat to Michael Chandler at Bellator 67.

Elsewhere, in the main event, former Sengoku Featherweight Champion Masanori Kanehara ensured that it was Goodnight Irene for Tony Reyes, needing only a single round to dispatch his foe. Reports are suggesting that the Japanese fighter is eyeing a move to the UFC, with a 3-fight winning streak in his pocket.

Here are the complete results: 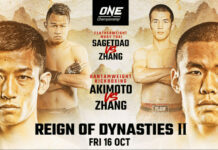 ONE: Reign of Dynasties II Recap 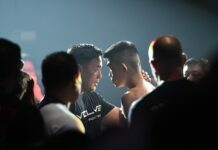 ONE: Inside the Matrix Finalized Card & Location Announcement