If you were a hardcore mixed martial arts fan before we had high-speed internet connections and the world at your fingertips you relied on tape traders to get your fix of MMA action, when I first started I would get these mixed bag tapes with fights from Shooto, Pride and Pancrase.

One of the earlier tapes I received in return for a copy of UFC 42 had the first encounter between Bas Rutten and Masakatsu Funaki on it, Funaki was Pancrase’s co-founder and promotional golden boy. The All Japan Pro Wrestling star was beloved by his Japanese contemporaries and in January of 1994 a young Dutch kickboxer by the name of Bas Rutten was no match for Funaki who forced him to submit in less than three minutes.

Submissions were the lone chink in the armor of Rutten in the mid-nineties being tapped by Funaki and UFC pioneer Ken Shamrock but two years on when Funaki and Rutten met in the Pancrase ring he wasn’t a one-dimentional fighter with two fights under his belt.

It should be noted the differences here between what you traditionally see inside the UFC’s Octagon, Pancrase wasn’t technically a mixed martial arts organization to begin with, they only allowed open-hand strikes and kicks on the feet and on the floor it was straight grappling with no ground-strikes permitted.

So enjoy this one folks, we have everything that there was to love about Pancrase on display with palm strikes, leg lock attempts, knees to the face and just about everything else in between. 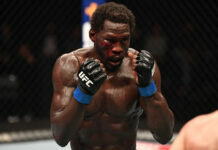