Popular Japanese fighter Minowaman (53-34-8) has been booked in a Catchweight Superfight  tilt with South-Korean, Yuk Jin Soo (9-2), for the upcoming ROAD FC 009: Beatdown event which is set to go down on September 15th.

Manhoef and Minowaman are well-known fighters in the Mixed Martial Arts industry, having competed for various promotions throughout the years. The duo have a combined total of over 100 professional bouts between them.

Melvin Manhoef recently snapped his 3-fight losing skid, after a fight with Yoshiyuki Nakanishi ended in a No-Contest at ONE FC 3: War of the Lions. However, the 36-year-old is still winless in his last 4 bouts, coming up short against the likes of Tim Kennedy and Robbie Lawler. Fighting out of Mike’s Gym in the Netherlands, Manhoef is brutal with his strikes whenever he enters the cage. He has competed in DREAM, Strikeforce and ONE Fighting Championship.

Kim Jae Young, on the other hand, will not be having any ROAD FC jitters having competed 3 times under the ROAD FC banner. With a professional MMA record of 15-9, Jae Young is 2-3 in his past 5 fights, and is 2-1 in his stint with ROAD FC thus far.

Minowaman, in the meantime, will need no introductions either. The 36-year-old PRIDE veteran has seen it all, and done it all in his MMA career. Having competed over 90 times in professional competition, Minowaman has faced the likes of former UFC Light Heavyweight Champion Quinton ‘Rampage’ Jackson, and legendary Brazilian slugger Wanderlei Silva. The Japanese superstar is 7-3 in his past 10 fights. He was last seen at SFL 2, where he was TKO’ed by Alexander Shlemenko.

His opponent, Yuk Jin Soo, will undoubtedly have to set up the barricades in his upcoming tilt with Minowaman. The South-Korean has only 2 blemishes on his professional MMA record thus far, falling short against Yoshinori Kawakami and Kiyoshi Kiyoshi under the Gladiator banner.

Stay tuned for more updates and fight announcements in the nears future.

With that said, here’s the updated card for ROAD FC 009: Beatdown: 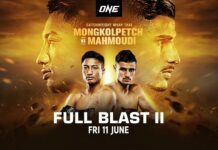 3 Things To Watch at ONE: Full Blast II