There was plenty of news worthy headlines last week in the world of MMA. With all the commotion of the card changes and the eventual cancellation of UFC 151: Jones vs Henderson, the big news of Frankie Edgar making a move to featherweight took a backseat. Now that all the dust concerning UFC 151 has somewhat settled, let’s turn our attention back to Edgar. Dana has said he would like Edgar to get a win or two before getting a title shot; which makes sense. Edgar himself has said that he would like to fight before the end of the year, which would hopefully set up a title fight sometime next year. As of right now, he doesn’t have an opponent confirmed for his new weight class debut, so I’ll take this opportunity to give you my top 5 potential opponents for Edgar’s next fight.

This is my top pick for Edgar’s first fight in the featherweight division. Mendes is coming off a KO victory over Cody Mckenzie at UFC 148 on July 7, 2012 and is just one fight removed from losing his title fight against Aldo. Mendes has a solid wrestling base with some power in his hands. His skill set should give Edgar a competitive first fight at featherweight and also has a name that the UFC can promote. Also, Mendes is the caliber of opponent that would warrant a title shot for Edgar should he come out with an impressive win. With no fight scheduled so far and his last fight being in July; he would make a great opponent before the end of the year. 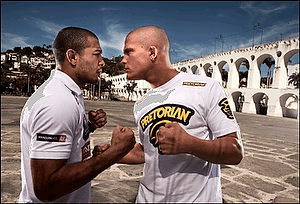 No offense to any fighter not named Jose Aldo Jr in the featherweight division, but a fight between Edgar and Aldo is the ultimate featherweight match up that most people, including the UFC, want to see. Even before Edgar announced his class change, people were talking about this potential fight. Both are quick on their feet but I’d give the advantage in striking to Aldo due to his KO power. Advantage has to go to Edgar in the wrestling department so it is a very intriguing fight. However, since Aldo is fighting Koch at UFC 152 in Rio on October 13th, the only way this happens this year is if Koch gets injured. With all the injuries this year, I have to put this as a possibility. On the flip side, if Aldo gets injured, it wouldn’t surprise me if they put Edgar in to replace Aldo. It gives Edgar a match against the current number one contender and the winner a legitimate claim to the title shot.

This potential fight would be ranked higher on this list had Jung not needed shoulder surgery recently. He had a proposed fight on November 10th in Macau but the fight fell through due to Jung’s injury and his return right now is unknown. He is one of the most exciting fighters in the UFC and is currently on a three fight winning streak. The Korean Zombie has a very loyal following and has been looking better and better with each fight. He is ready for a step up in competition and the winner of this fight would be the unquestioned number one contender. If Jung can return before the end of the year, the UFC should definitely make this fight.

This is somewhat of a dark horse pick. Since moving down to featherweight, Oliveira has scored two victories over Eric Wisely and Jonathan Brookins. He currently has a fight scheduled with Cub Swanson at UFC 151 on September 22nd. Should Oliveira come out victorious and without serious injury, he should be ready for a step up in competition with Edgar on the December card. Oliveira is a sparkplug with great striking skills and a diverse submission repertoire (reverse calf slicer anyone?) so a match up with Edgar would definitely be entertaining. Edgar has the wrestling advantage so it’ll be interesting to see if he takes it to the ground and plays with Oliveira’s submission game or keeps it standing and utilize his boxing and quick footwork.

This number 5 spot was a tough one to choose. I had it coming down to Denis Siver or Ricardo Lamas but the nod goes to Siver because he has bigger name recognition comparatively. He has fought on previous UFC main cards against contenders like Maynard, Sotiropoulos and Cerrone so it gives the UFC an opponent easier to promote for Edgar (although Siver lost to all three…). He made his featherweight debut against Diego Nunes with a victory and was slated to face Yagin at UFC 151 before the event was cancelled. Since they haven’t rescheduled the fight yet, Siver can be a possibility. He is not the “sexiest” choice for Edgar but with Siver’s kickboxing and sambo background, it could be a good first test.