The 16th season of The Ultimate Fighter is set to debut on FX on Friday September 14. The two coaches this season are heavyweights Roy Nelson and Shane Carwin. It was announced last month that Carwin’s coaching staff was going to be Trevor Wittman, Pat Barry, Nate Marquardt and Leister Bowling. It appears that Roy Nelson has assembled somewhat of a superteam for his coaches. He brought in Royce Gracie, Georges St. Pierre, Chael Sonnen, Rashad Evans, Forrest Griffin, Nick Diaz, Nate Diaz, Gilbert Melendez, Jake Sheilds, Martin Kampmann, Gray Maynard, Amir Sadollah, Mike Pyle, Jeff Mayweather, James Johnson, Ron Frazier and Anthony Brown to be a part of the show. He also brought on Kurt Angle, “King” Muhammed Lawal and Victor Conte to be his “unofficial coaches” off the air.

To prove he brought on the big boys, below is a picture of Royce Gracie and Roy Nelson at the TUF Gym.

Nelson posted the pic on his Facebook page with this caption.

“Royce and I discussing how he built the @UFC, and how he wanted me to help @danawhite make it better.” 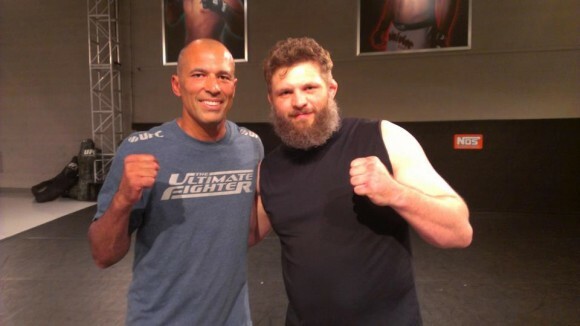