Team Bad Boy Outreach is a not-for-profit MMA gym that is located in the tough Surrey neighborhood of Whalley. There you will find Jimie Griffiths who has dedicated his life to helping at risk youth turn their lives around through martial arts.

Jimie is a 5x WKA and Canadian Muay Thai Champion, and joined Craig Nieslon and I on “Final Round: The MMA Show” on the Team 1410 am last Saturday afternoon in Vancouver, to talk about how a small MMA school has become an outreach for men and women who need a second chance at life. 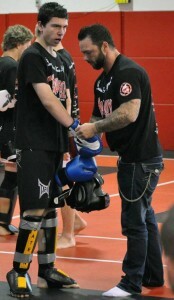 This mixed martial arts school is mainly geared towards at risk youth who live in the community who may not have much else going on, said Griffiths.  At the same time I put the outreach behind it because I also sponsor guys who are transitioning from drug and alcohol treatment programs, federal half way houses, ex gang members, and other people of that nature who are good guys that made bad decisions. Bad Boy Outreach gives them an outlet to focus their energy in a positive way.

The only thing Jimie asks from his students is that they stay clean and sober and keep away from criminal activity. What he provides them in return is a place that shows them a more positive way to live through mixed martial arts. What makes Jimie’s efforts even more extraordinary is that the gym is funded mostly out of pocket along with a few donations.

I can’t explain the feelings and energy that you get when you walk into our gym. I have people come in off the street because they have heard of us, said Griffiths. I can’t afford a sign. Everything is pretty much coming out of pocket. I’m right on King George Highway with thousands of cars that go by everyday but it’s basically all word of mouth.”The success rate at Team Bad Boy Outreach center is the best part of this story. A lot of the guys that end up training there make the effort to become positive citizens and go out and get jobs. Jimi will allow his students to train for free until they have been able to rehabilitate or get their feet back underneath them where they can start giving back to the gym. So how does Jimi fund the gym? He works the graveyard shift seven nights a week as a longshoreman.

Every one of my students is working now and some of them pretty physical jobs like tying rebar or laying concrete, said Jimie. They work eight; ten, and sometimes twelve-hour days and then they come and train for a few hours. So for me, when I go and sit in my crane, as a third generation longshoreman at Delta port, and move a few containers around, it’s really nothing.

It is something. It’s a wonderful story about the healing power of martial arts and the generosity of Jimie Griffiths. If you are a company or individual I urge you to donate to Team Bad Boy Outreach, please call Jimie at 778-926-KICK(5425) or go to his website at teambadboyoutreach.com.