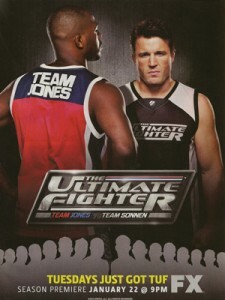 There were rumors swirling last month as to the new day that FX would air the next season of The Ultimate Fighter. MMASucka.com has confirmed with the Vice President of Media Relations with FX, Dominic Pagone that “The Ultimate Fighter 17” will debut on Tuesday January 22, 2013.

Tuesday night on FX has been one of the biggest nights on TV, as “Sons of Anarchy” airs on that night at 10pm ET. In January the new FX-original series “Justified” will take-over the 10pm ET time-slot and will most likely follow The Ultimate Fighter.

“TUF: 17” began filming in October and is expected to wrap in the coming weeks. This season will feature middleweight fighters who will be coached by UFC Light Heavyweight Champion Jon Jones and former Middleweight Contender Chael Sonnen. The two will meet in the main event of a UFC event next April.