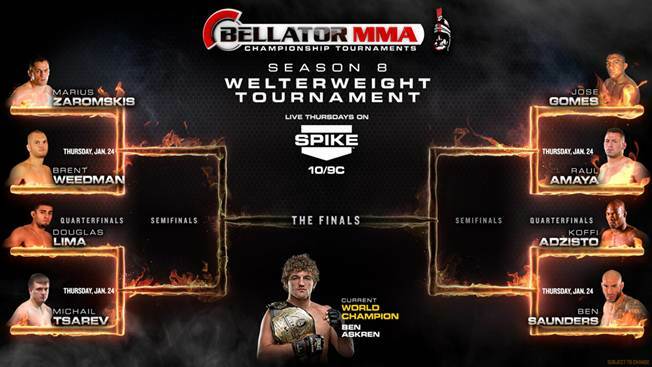 The event will broadcast LIVE starting at 10 p.m. EST on Spike. The preliminary card will be streamed LIVE and FREE on Spike.com starting at 8 p.m. EST. Tickets for the event are on sale now and can be purchased at Ticketmaster.com or by visiting the WinStar World Casino Box Office, with tickets starting at just $45 dollars.

Fan favorite and Bellator veteran Ben “Killa B” Saunders will return to the Bellator cage as he battles dynamic welterweight Koffi “The Lion King” Adzitso. Training under the tutelage of long time MMA veteran Jeremy Horn, Adzitso is eager to bring his finishing power to the Bellator cage. For Saunders, the always entertaining American Top Team product knows with the bright lights of Spike TV upon him, this is his time to shine.

“I’ve had my sights set on getting back into this tournament for a while,” Saunders said. “Everyone knows what type of energy I bring into every one of my fights, and to have the opportunity to do it on Spike is all I could ask for. I can’t wait to get started on January 24th.”

Former Bellator Tournament Finalist Brent Weedman is back and will look to make another long tournament run when he meets “The Whitemare” Marius Zaromskis in opening round action. With only five decision victories between the two long time veterans, neither fighter is expecting a 15 minute affair.

“Whenever I step into the cage, I’m looking for a finish, and nothing is going to change against Brent Weedman,” Zaromskis said.

RusFighters product Michail Tsarev will bring his impressive arsenal of submission skills to the Bellator cage when he battles top welterweight contender Douglas “The Phenom” Lima in front of a packed WinStar World Casino crowd. Having already navigated his way through a previous Bellator Welterweight Tournament, Lima is fully aware of what it takes to lock up his title shot, and has every intention of getting another shot at the Bellator Welterweight World Championship.

“I’ve been there once, and everything I do is the gym is to get back to that point,” Lima said. “This is what I train for every day, and my only goal to get that $100,000 check and a shot at the belt.”

The tournament rounds out with Bellator newcomer Jose “Zezao Trator” Gomes getting his first taste of The Toughest Tournament in Sports when he takes on the nearly undefeated Raul “Smash Mode” Amaya on January 24th.

“From top to bottom, our welterweight division has a collection of pure finishers that have put on some wildly entertaining fights,” Bellator Chairman & CEO Bjorn Rebney said. “With a Welterweight World Title fight, the debut of King Mo and a stacked welterweight tournament, January 24th is going to be a huge night from WinStar World Casino.”