The end of an era approaches on Saturday night as Strikeforce will hold it’s final MMA event. The company is going out with a whimper, offering a half-hearted goodbye after cancelling two of it’s final three planned events. While the promotion is sputtering to a halt, it would be a shame if fans based their opinions on the promotion off of the final event. Strikeforce leaves a legacy of being a trail-blazing promotion which was able to break ground and offer a genuine alternative to the UFC’s product.

The first Strikeforce event took place on March 10, 2006 at the HP Pavilion in San Jose, California. The event was the first-ever regulated MMA event in the Golden State. Historic for that reason alone, it also remains important because the event set what was at the time a North American MMA attendance record, proving that not only was the largest state in the union ready for the sport, they were prepared to support their local stars. 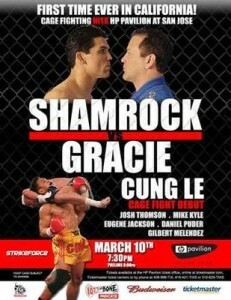 Headlining the card that night was all-time great Frank “The Legend” Shamrock, San Jose’s favourite son, known not only for his UFC and Pancrase tenures, but famous on a local level as well with his founding of San Jose’s famed American Kickboxing Academy. Shamrock’s opponent that night was Cesar Gracie, another northern California fixture and leader of the famed “Scrap Pack”. Shamrock KO’d Gracie in short order that night, but more important than the result itself was the sheer amount of people who came out to support it.

The second card also featured Le in a prominent position, but the main event slot pitted Alistair Overeem against Vitor Belfort, a fight that would be a legitimate pay-per-view draw for any promotion in the world. 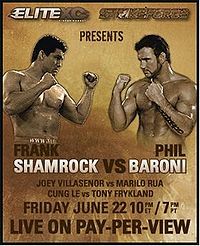 After building a loyal local fanbase, Strikeforce did attempt to branch out into
PPV. Shamrock and UFC/Pride veteran Phil Baroni had used the internet to volley trash-talking missiles against each other, and finally locked horns on June 22, 2007. The event was an entertaining and theatrical affair, with Shamrock eventually submitting Baroni in the second round. Although the PPV did modest numbers, it did top what Pride was able to accomplish in the North American market.

Shamrock and Le continued to be the lynchpins of the promotion, and with both men competing in the same weight class and undefeated in the promotion, they were inevitably matched up on March 29, 2008. While many thought that Shamrock had a decided advantage on the mat, he decided to keep the fight standing, possibly for entertainment value. The two went back and forth for three rounds before Shamrock threw in the towel, having had his arm broken by a powerful Le kick. Le became the new Strikeforce middleweight champion and thanks to the event being broadcast on Showtime, cemented his status as one of Strikeforce’s biggest national stars, no longer just a regional one.

Shamrock’s career was winding down, but his name still had a lot of marquee value. For that reason as much as any other, he chose to take on Nick Diaz in a catch-weight fight. The pre-fight press conference was as memorable as the fight itself, with the iconic image of Diaz flipping off Shamrock as he extended his hand for a handshake. Diaz won the fight and sent Shamrock into retirement, also cementing Diaz’s place as a legitimate star in the sport.

With Shamrock’s career over, Strikeforce was in need of a new franchise face. Strikeforce made what was a game-changing decision in the sport, reaching a co-promotional deal with the M-1 Global organization for the services of Fedor Emelianenko, the consensus number one heavyweight in the sport and arguably the greatest fighter of all-time. Landing Fedor was a huge coup for the organization, as he was being courted by the UFC at the time.

Landing Fedor was not the only coup however, Strikeforce was also able to come to an agreement with CBS to air fights live on network television, being only the second promotion ever to do so. Strikeforce’s debut on CBS was headlined by Fedor taking on Brett Rogers and the event was a rousing success, drawing over four million pairs of eyeballs to the event. 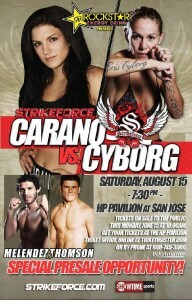 While 2009 was a year of landmark growth for Strikeforce, 2010 saw cracks begin to develop. The heretofore “undefeatbale” Fedor was submitted by Fabricio Werdum, in what some called the “upset of the century. It also saw the end of the CBS deal, as the event headlined by a Dan Henderson-Jake Shields fight drew almost 3 million viewers, but was marred by a post-fight brawl between Jason “Mayhem” Miller and Shields’ teammates. CBS was rightfully appalled by the display and made the decision that they no longer wanted to be in the Strikeforce business.

Smarting from the loss of network television and a blow to the marketability of their biggest star, Strikeforce felt they needed a big idea for 2011. That idea came in the form of the Strikeforce Heavyweight Grand Prix, a tournament featuring Strikeforce’s biggest stars in the heavyweight division, which was the one division where they could truly claim they had the best collection of talent in the world. The tournament appealed greatly to the hardcore MMA fanbase as it was a throwback to the Pride era Grand Prix tournaments which were remembered fondly. The tournament featured Fedor, Werdum, Overeem, Josh Barnett and other big-name heavyweight stars.

The tournament began with great optimism, but quickly dampened as pre-tournament favourite Fedor was again shockingly upset, this time by Antonio Silva. Strikeforce heavyweight champion Alistair Overeem also pulled out of the tournament after the first round. When the tournament finally came to an end almost a year and a half later, with alternate Daniel Cormier upsetting Josh Barnett in the finals, it was relegated to a footnote.

Zuffa swooped in to purchase Strikeforce, vowing things would be “business as usual”. That was not the case, as almost all of Strikeforce’s most marketable talent was swooped up to fight in the UFC. But the women’s division continued to be a focal point for the organization, with Ronda Rousey achieving breakout star status after defeating Miesha Tate for the 135 pound title and defending it against Sarah Kaufman. Not since Carano had a female fighter achieved such popularity, all but forcing Dana White to backtrack on his previous comments on women’s MMA and welcome her to the organization.

When the book closes on the history of Strikeforce on Saturday night, there will be plenty who will want to lump the organization in with doomed-to-fail ventures like the Affliction’s and IFL’s of the world. But when one looks at what they were able to accomplish and the star power they were able to launch, the truth becomes clearer. Strikeforce was a fledgling local promotion that was able to ride their success into becoming the second largest MMA organization in the world. They launched a number of great careers and provided the largest platform for women’s MMA to date. The worst thing you can say is that perhaps their reach exceed their grasp. We should all be so lucky.