Welcome to a brand new feature on MMASucka.com. Every week I will give you three rounds of deep thought, intellectual stimulation, and a plethora of knowledge to feed your fight starved cranium. So sit back, and as “The Friendly Giant” use to say, “One little chair for one of you, and a bigger chair for two to curl up in, and for someone who likes to rock, a rocking chair in the middle.” and enjoy.

Round One – MMA Media

Evan Dunham, who appeared on MMAJunkie Radio, called out a writer from Bleacher Report. 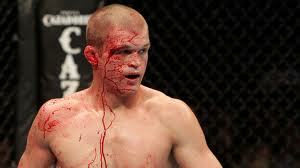 I tell you who I would like to fight: Rafael dos Anjos. I read an interview saying I had no business fighting a guy like that and that he’s at a whole different level. Bleacher Report put out something – I’m not very happy with that guy, but I don’t let it get to me.

A few weeks earlier Joe Lauzon hinted at having a beef with something a writer wrote on  “the slide show website” as well. This isn’t the first time a fighter has had a problem with something that has been written about him or her. Just ask Todd Duffee what the thinks of me and this website. Long story don’t ask.

Yet, I have a growing concern that there are certain “media” members out there that would rather sit back and write demeaning columns on fighters because they think it’s avant-garde to be hyper critical. What I find amusing is most of those “writers” would never step foot in a cage themselves. Hell, most of them would need to stop and catch their breath after sitting down at their favorite fast food chain. I do understand the idea of an opinionated column, in fact you are reading one right now. However, there has to be a line drawn in the sand somewhere where it’s obvious you don’t cross.

For every Ariel Helwani, John Morgan, Ben Fowlkes, Spencer Kyte, Damon Martin, Duane Finley, Mauro Ranallo, Joe Ferraro, and pretty much every writer who writes for this website, there are a few douche bags who ruin things for a lot of people. I will not mention them by name, and nor is this me taking a shot at Bleacher Report, in fact for the record, they have a solid core of two or three writers over there.

Everybody wants to be a part of this great sport. I have been lucky enough to be covering it for MMASucka.com and Sun Media for the last four years. I’m no angel, but you will never read a piece from me slamming a fighter. As a member of the MMA Media, I believe we have a responsibility of making sure that we always show respect to the athletes and the sport that we cover. Just for the record I didn’t really have a problem with what was written concerning Evan Dunham, but in the past I have read articles that have been completely distasteful and disrespectful all in the name of trying to make a name for one’s self.

In closing round one, media members are not trolls or fan boys from the MMA Forums. With opinion comes great responsibility, and it is a lesson I’m still personally learning. There is no problems in being critical or expressing one’s pleasure or displeasure in a fighter’s performance, but when that point-of-view becomes disrespectful and personal, it’s time to put the keyboard away, step back and remember what sport you are covering. It’s Martial Arts, and those values and life lessons are not just for the warriors that compete in the Octagon but those same philosophies should also be adopted by the media and fans that enjoy watching it. Keep it classy. 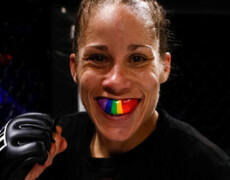 Can we get over the fact that Liz Carmouche is a Lesbian? I know that it’s used to drum up publicity for a fight and it gives us an inside and personal look at the fighter, but does sexual orientation really need to be brought up ad nauseam? Does it really matter? It’s 2013, it’s not the first time an athlete has opened up about being gay and it won’t be the last. I applaud Liz for putting herself out there, and I hope more athletes are brave enough to do the same in the future. However, let’s get over it now because Carmouche being a Lesbian has nothing to do with defending an arm bar.

The first episode of the UFC 157 Primetime show was stellar and we got a great glimpse into Ronda Rousey’s life. I knew that her father had committed suicide but we got to see a very raw and emotional Ronda when she spoke about her past relationship with her father. One thing that she said that really stuck with me was when she mentioned that she feels ashamed for talking about her dead father to drum up publicity for herself and her fight. Again, it’s interesting fodder for fans to see inside of what makes an athlete like Rousey and Carmouche tick. Homosexuality and suicide are two subjects that are pretty heavy shit to be talking about, but now that we have got that out of the way, let’s start moving on to conversing about how a major underdog in Carmouche is going to stop Rousey from continuing to catapult into to the MMA stratosphere.

I remember saying on MMASucka Radio (heard weekly on MMASucka.com and Sportsnet.ca) that Ronda Rousey could Main Event a Pay-per-view, and I stick to my guns on that one, although, I was mostly talking about a fight between Rousey vs. “Cyborg” Santos doing big pay-per-view business. Nonetheless, if you are going to bring out a new division to the masses, you might as well give it some pomp and circumstance. Make it special and give the women’s division a shot of promotion. Women belong in the UFC, they are amazing athletes, and 90% of the time they deliver with the best bout of the evening. Rousey is a star and it won’t be her last PPV Main Event, and I think we should all respect that, and welcome it with open arms. Just don’t let Ronda grab one.

I will be honest; I don’t watch a lot of Bellator. That’s not a shot at the promotion and the hard work Bjorn Rebney and now Spike have and will put into the organization. I just don’t have time to watch every fight that is out there. My biggest issue with Bellator is the weekly show format that I think dilutes their brand, and to be honest, makes it hard to pay attention. I only have so much space in my brain for fights, and when a lot of my head is filled up with haze, UFC, kids, MMASucka.com, and Oreo cookies, it’s hard to find room for weekly Bellator episodes.

I don’t think MMA works as a weekly broadcast. It’s not Happy Days or Family Ties. I know Hockey, NFL, and other sports are shown on a weekly if not daily basis, but I think it doesn’t translate well with fights. I like the UFC model, but lately even they have pushed the envelope on “too much.” Don’t get me wrong, I’m a fight fan and I do pay attention, I kind of have to, but do you not find the Bellator tournament a tad wearisome? I like tournaments, but maybe it’s time to start moving towards a pay-per-view type format. Why not bi-weekly fights on Spike? They can continue the tournament format, but use those free fights on TV to drum up promotion for a PPV that has the final fight of the tournament as well as some other interesting match ups.  I also believe that if you make the tournament on a bi-weekly basis, it would free up more time for fighters to heal up and prepare for their next opponent.

Bellator is going to have a reality show on Spike TV. Let’s hope they don’t go down the same road as the UFC. The Ultimate Fighter is tiresome and played out. I hope they find a new formula. By having Greg Jackson, Randy Couture and Frank Shamrock involved in this new televised show is a great start, and hopefully the people at Spike TV will give us fight fans something different and fresh with their dose of “reality.” I think it will mix well with their free fights and help in positioning Bellator as a viable #2 promotion in the fight game. I just think it’s time to re-tweak and start pushing the organization in a different direction, otherwise it will continue to be obscure.

There is some food for thought.

Happy Birthday to MMASucka.com as it celebrates its fourth year.