At UFC 158 Chris Camozzi will step into enemy territory as he takes on Canadian Nick Ring. Ever wonder what pumps up a fighter to step into the cage? Well, we’ve got you covered with Camozzi’s fight music pick and possible walkout music. 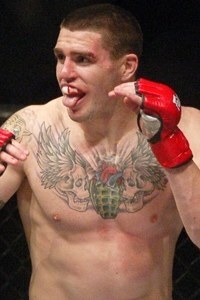 “I’m not 100% sure what we’re going to pick, but I’m going to use something from Hatebreed. They’ve been a big sponsor of mine for a while. A lot of times we go off of new albums they have coming out. Sometimes I’ll let them pick or we’ll both decide on one together. They’re a metal band; Jamey Jasta is the lead singer and he’s been a friend and sponsor of mine for quite a few fights now, so I like to represent them and use their music when I walk out.”

It has since been confirmed that Chris will walkout to “Honor Never Dies” by Hatebree off of their newest album The Divinity of Purpose. You can get your copy on iTunes here: http://smarturl.it/HBdiv