Firas Zahabi is a busy man. Sure he may not be putting cover sheets on all his TPS reports, or pushing a wheel barrow in the cold Montreal winter, but the Tristar head coach has been busier than ever and he doesn’t seem to mind.

“I wake up in the morning and I do my own little routine. I do my own weights, I do my own bag work or shadowboxing or running, I’ve got to get my workout out of the way. Then I get to the gym and it’s about the pros. I train the pros during the day and then I go home and I train my kids and wife who does Jiu-Jitsu as well. I try to take a rest during the day and then I head right back to the gym at night to train all the guys at the amateur club. It’s just all day in the gym, but obviously my highlight of the day is training the pros, the elite guys, you know the guys who are fighting in the UFC or other major organizations.”

Firas eats, sleeps, and breaths Tristar and with three of his students in Mike Ricci, John Makdessi and Georges St-Pierre on this weekend’s UFC 158 card, his workload has never been higher. Since 2007, when he purchased Tristar gym and became the head coach for long time friend George St-Pierre, Firas has seen a small kickboxing gym turn into an international MMA Mecca.

“We’ve got guys from all over the world. We’ve got guys right now from England, Ireland, a lot of people from the US and a couple from France. It’s really a hot spot; everybody from around the world comes to visit us. We even have a guy from Japan with us right now. He doesn’t speak any English, but we’ve got so many guys with different styles coming in.”

Lots of guys can sometimes mean an increase in the in house competition. Another one of Zahabi’s protégé students in Rory MacDonald was taken off the UFC 158 card due to a neck injury he sustained while training. It appeared that Rory was on the mend, but during this week’s festivities, MacDonald told Sportsnet that he re-injured the neck while training, something that didn’t sit well with Firas.

“We’ve had that talk about his training a few times and emotions always get in the way. You get in there, you want to do more rounds, you’re warmed up and you think you’re fine. When you cool down, the next day you wake up, your neck is in bad shape. The doctor told him take two weeks off, he took one week off and re-injured it. The doctor told him that if you do that again and you are going to be out for a long time. We had to really keep him away and out of the gym so it doesn’t happen a third time, because it’s all about his emotions.”

It seems “Ares” has become a handful for the coaches at Tristar in trying to get him to take it easy, but it’s just another day at the office as Rory is the not the only one at the gym that needs to be constantly reigned in. 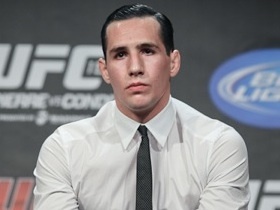 “Your emotions get the better of you and you want to train more, it’s normal. There’s a point where fighters train too much and it backfires, you get injured or you over-train and burn out. Rory is a smart kid and I think he’s going to learn from this, but I’ve got to really keep an eye on him because he’s the kind of guy that gets too excited about the training. It is why they used to call him “The Waterboy.””

Moving forward this weekend is not about Rory MacDonald; instead Firas’s focus has been on coaching the likes of Mike Ricci when he makes his debut in the UFC’s lightweight division this Saturday night. The TUF 16 finalist is ready to rebound after coming off a tough loss to TUF 16 winner Colton Smith.  Ricci looks focused and confident as he prepares to go to battle with the British standout Colin Fletcher, a lot of that has to do with the time that Zahabi and the rest of the Tristar coaches have put into their prospect.

“We really wanted to touch up on the wrestling. Mikey’s a very good wrestler, but he had a hole in his wrestling that kept getting exploited and we needed to patch that hole up.  It’s a really important thing to do, because it was a gap that Colton [Smith] was able to exploit over and over again.  At the end of the day there was just a hole in his game that we needed to patch up. We didn’t see it coming and now he’s going to be a better man because of it.”

Yet when it comes to fighting Fletcher, Zahabi believes it will be Ricci’s slick boxing that will get the job done.

“Colin is a very lanky guy, so it might be awkward striking with him at first, but in the end, the nuts and bolts will be boxing, I think Ricci is better. I’m going to put my eggs in that basket. “Freakshow” has a great guillotine and a great arm-choke; he’s got a great kimura, so we are working hard on avoiding those things and not giving it to him.”

Although it’s a busy week for the coaches at Tristar, a lot of Firas’s focus has been getting GSP ready for his title defense against Nick Diaz. With all the emotion and anxiety that seems to be brewing in Georges, it is up to coach Zahabi to make sure that the eye is firmly focused on the prize come fight night. It appears Diaz has gotten under GSP’s skin and a lot of that can be attributed to both fighters being polar opposites.

“I think they are complete opposites, can you get more opposite than these two? Their demeanor, the way they carry themselves, their styles. One’s a righty, one’s a southpaw, one’s a boxer, one’s a kick boxer, one’s a wrestler, one’s a jiu-jitsu, I mean everything is completely opposite. I think that just riles things up and there is such a contrast in personalities and lifestyles and everything. I think it’s just two guys that don’t understand each other that are going to go at it.”

Much has been made of Nick’s boxing game. He has a unique style of punches in bunches that eventually overwhelms his opponents. The Stockton native is one of the hardest fighters to prepare for and Zahabi knew that it would be a challenge.

“We have a lot of seasoned lefties and Georges is boxing with guys who are very experienced. He’s just getting a taste of this style and finding its weaknesses and making sure that the pitter-patter punching style doesn’t get Georges backed up to the fence.”

Although Diaz’s striking game is a big focus, it’s on the ground where Nick shines. His Jiu-Jitsu has always been some of the best in the game and it’s something that Georges can’t overlook. It’s no secret that GSP will probably try and take the fight to the ground and this is where the “beat down” could begin and end.

This Saturday Firas Zahabi will be a busy man, but it’s nothing new. Sure it’s not the Dunder Mifflin paper company and he may not be punching the clock at the rock quarry, but it’s a job that requires a special skill set. Firas provides all his students the personal touch and gives them his undivided attention. It doesn’t matter if you are Mike Ricci, John Makdessi or George St-Pierre, each fighter gets the attention they need so they can enter the cage with the confidence that they have one of the best in the business at their back.

You can listen to Trevor on MMASucka Radio heard weekly on MMASucka.com and Sportsnet.ca. Follow him on Twitter @tdueckMMA