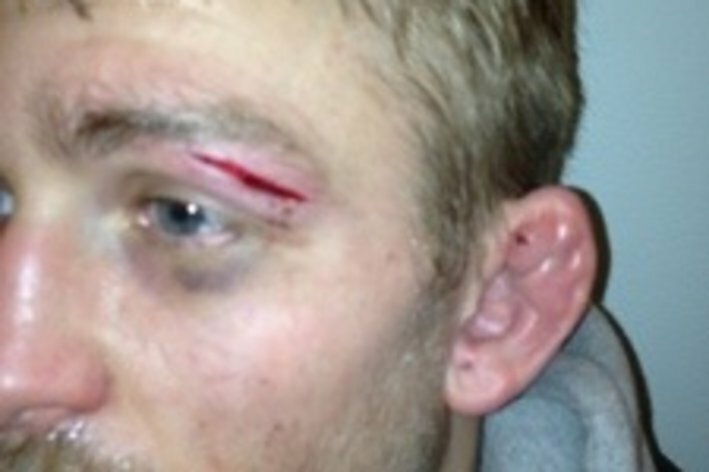 Earlier this week the rumors were swirling about Alexander Gustafsson being forced out of his UFC on FUEL TV 9 main event against Gegard Mousasi. Well, yesterday the rumors were put to rest, as the Swedish MMA Federation would not clear “The Mauler” to fight this Saturday night.

Our good friends at MMAnyt.se supplied the above photo of the laceration and a statement from Gustafsson below.

“During Thursday’s (March 28) passes as we ran wrestling exercises I lost my balance and pitched eyebrow in a very unfortunate way when I hit my head on one burpelaren. Immediately after it happened, I went to the hospital and sewed three stitches. I was quite prepared to compete until the doctors called and told me that cut is unfortunate and will not have time to heal in time until the gala.

It is of course extremely sad when träningscampet has gone very well. In addition to the eyebrow, I am in my best form and completely ready for the match. It is also sad for my opponent, Gegard Mousasi, who has also been training long and hard for this match.

I and my team have done everything we can to get set up and race despite the injury, but the decision is unfortunately not in our hands. I am extremely sorry for this and I feel with Gegard Mousasi. I also suffer with the fans who have been looking forward to this event and this match. Would also like to thank my entire team who have helped and supported me all the way. The next step now is that I sit down with the team and planning the future.”

With Gustafsson out, the UFC has picked up one of his training partners, Ilir Latifi to take on Mousasi in the main event this Saturday night at UFC on FUEL TV 9.