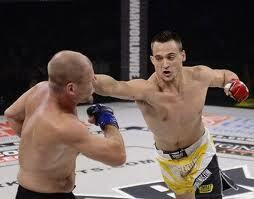 Another injury has forced a fighter out of the UFC 161 event. Lightweight fighter Isaac Vallie-Flagg has been dropped from the card due to an undisclosed injury, so former WEC fighter James Krause is stepping in to take on Canadian Sam Stout.

The 26-year old has been fighting professionally since 2007 and has fought for many other MMA promotions including Titan Fighting Championships, Shark Fights, Bellator and WEC. Krause was a favorite to get in to the TUF house on The Ultimate Fighter Live, but was upset by Justin Lawrence.

Stout (20-8-1) has had a roller-coaster ride since the loss of his coach Shawn Tompkins. “Hands of Stone” is coming off a split decision victory over Caros Fodor at UFC 157 in February.

The Team Tompkins fighter is known for his exciting style and has won bonus awards in six of his UFC battles.

UFC 161 will be the organizations first trip to Winnipeg, Canada. The main event is a light heavyweight fight between Dan Henderson and Rashad Evans. It will take place at the MPS Centre and will also feature Jake Shields vs. Tyron Woodley, Mauricio ‘Shogun’ vs. Antonio Rogerio Nogueira and Soa Palelei vs. Stipe Miocic.