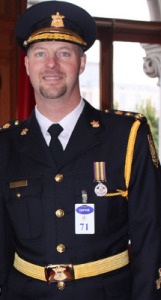 British Columbia has taken its next step in getting professional MMA sanctioned, as they have officially appointed former Chief Sheriff of BC Sheriff Services Dave Maedel as the provinces first Athletic Commissioner.

According to the government website, Maedel is an accomplished public servant. Starting in 1984, he worked as a paramedic and earned positions of increasing responsibility—ultimately running the Ambulance Service on Vancouver Island. In 1996, Maedel earned his Master’s in Public Administration from the University of Victoria. Most recently, he has served as the Chief Sheriff of the BC Sheriff Service. In this role, he led the modernization of duties, training and leadership in the sheriff service.

Outside of work, he is active in the sporting community where he referees minor hockey and holds a C-level certification as a youth soccer coach.

Maedel has been recognized with the Justice Institute of BC Distinguished Alumni Award, the Queen’s Diamond Jubilee Medal and the Emergency Medical Service Exemplary Services medal.

There are multiple organizations vying to bring professional mixed martial arts back to Vancouver, including MFC, AFC, BFL, and Fivestar Fight League. Of course, most fans are hoping to see another UFC event brought to Vancouver sooner than later.