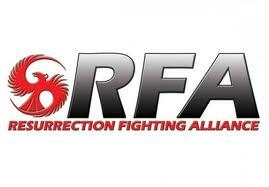 Resurrection Fighting Alliance (RFA) today announced the signing of a major sponsorship deal with Inca Kola, the popular soft drink and trademark brand that The Coca-Cola Company owns worldwide, and that Inca Kola has officially entered the RFA cage as a major brand sponsor for 2013.

“I’m honored to have the iconic soft drink Inca Kola as a major sponsor for RFA Fighting and especially to be working with its COO Randall Berman,” said Ed Soares, president of RFA Fighting. “I grew up drinking Inca Kola, and like millions of others, I associate it with family, major sporting events and as ‘a soft drink that’s like no other.’ I’m excited to welcome Inca Kola to the RFA cage.”
“Inca Kola’s sponsorship of RFA Fighting, a respected mixed martial arts organization with events broadcast live nationally on AXS TV, is a huge opportunity for our brand,” stated Randall Berman, Chief Operating Officer, Continental Food and Beverage Inc., the licensed bottler for Inca Kola. “Our partnership with RFA represents Inca Kola’s commitment to promoting healthy and active lifestyles and marks the start of our sports-related marketing plan for 2013.”
The Coca-Cola Company owns the Inca Kola trademark worldwide with the exception of Peru. A soft drink that British immigrant José Robinson Lindley created in 1935, Inca Kola is a source of national pride and patriotism in Peru, and is available in parts of South America, North America, Europe and Asia through Latin American specialty shops worldwide. In the United States, Continental Food and Beverage Inc. is the exclusive licensed bottler for Inca Kola, which is sold in two-liter bottles, 20oz bottles 10oz glass bottles 12oz cans, and they even have a Diet version.
Inca Kola first appeared on RFA’s canvas at RFA 7 on Friday, March 22. The popular soft-drink brand will be integrated into all of RFA’s future events in 2013. Inca Kola will make its second appearance on the RFA canvas at RFA 8 taking place this Friday, June 21 from Milwaukee’s The Rave/Eagles’ Club and live on AXS TV. RFA 8 features double title fights with Sergio Pettis vs. Jeff Curran as the headliner and reigning featherweight champion Jared Downing taking on Lance Palmer in a championship co-main event.
For more information on Inca Kola, please visit www.incakolausa.com and Facebook.com/incakolausa.
Stay tuned right here at MMA Sucka for more live streams as well as videos highlighting the top fighters, commentators, coaches, promoters and other names in MMA and combat sports. We also bring you great offers on the latest MMA products and merchandise. You can also subscribe to our youtube channel for regular updates and all the latest fight news. You can also check out our sister sites, the Last Word on Sports Network for a look at news, rumors, analysis, and editorials on major sports from around the world.