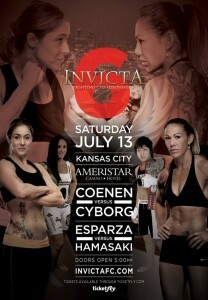 Let’s be honest: Every now and then it’s fun to get down into the nitty-gritty statistics and see if we can’t perform some MMAth. It helps us analyze future fights and make predictions based on previous history. Fans of all sports do it, so why can’t we? It can help us look for potential trends in a fighter as well. So, with thanks to Sherdog and FightMetric.com for the raw data, let’s examine the main event of the upcoming Invicta FC 6: Marloes “Rumina” Coenen vs. Cristiane “Cyborg” Justino.

Stats for Suckas: Coenen vs Cyborg

The first fight between Coenen and “Cyborg was” certainly hard on the durable “Rumina”, who suffered only the second (T)KO loss of her career against the Brazilian in Strikeforce. While the failed drug test in that same promotion cast a shade of doubt over Justiano’s victory over Coenen, it will be interesting to see what new weapons the Golden Glory-trained  fighter will bring to bear on her overpowering opponent. While Justiano has improved her BJJ since the two first clashed, gaining a purple belt under Andre Galvao, I can’t help but think that the slick guard game of Coenen may be able to neutralize her this time, and allow the Dutchwoman to even their series at one a piece.