We have sailed through the first half of summer and August is upon us. We are early in one of the warmest months of the year and with that, there are some much anticipated mixed martial arts match-ups to look forward to.

In this series, I will cover the top five most intriguing match-ups of the month. You may not agree with me on some of them, but that is fine, they are my thoughts, not yours.

Five most intriguing match-ups of August

Check out my five biggest match-ups of August below – in no particular order. 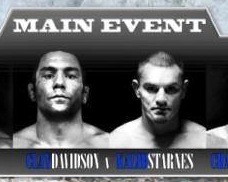 Many people laugh when the name Kalib Starnes name gets brought up in the MMA community, however since being released from the UFC he has fought some big name fighters including Hector Lombard and Patrick Cote. On August 9, Starnes will return to the cage riding a two-fight winning streak to take on Clay Davidson at Fivestar Fight League 8. Starnes’ last fight was an impressive unanimous decision victory over Tim Hague at AFC 19 in the heavyweight division. Davidson holds an 8-4 record and should not be taken lightly. He is coming off a submission win just one-month earlier against Cody Krahn at XFFC. This bout will definitely be fireworks in the main event at Penticton, BC’s Barefoot Beach Resort.

Even though Tyrone Spong has only had one mixed martial arts bout, he holds a 72-6-1-1 kickboxing record. The “King of the Ring” will look to make it 2-0 as he takes on Angel DeAnda in the main event at WSOF 4. DeAnda is on a four-fight winning streak coming in to this bout and holds an impressive record of 11-2. Don’t look at Spong’s 1-0 record as him being green to the sport by any means; this will not be a veteran versus rookie match-up and should provide explosive stand-up wars for the fans on NBC Sports.

“The Demolition Man” Alistair Overeem will make his return to the Octagon against Travis Browne after his first loss in over five years back at UFC 156 against Antonio “Bigfoot” Silva. Browne’s lone loss also comes at the hands of Silva, which should make this an interesting tussle. The horse-meat eating Overeem will outweigh Browne, by nearly 25-pounds on weigh-in day and much more than that by the time they step inside the Octagon. The speed and pressure could play a definite factor for “Hapa” in this fight and my gut is telling me that Overeem will look to end this early or he could be in for some trouble… AGAIN.

Fans and media alike have been looking forward to the rematch between Carlos Condit and Martin Kampmann ever since their first tango back at UFC Fight Night 18 back in 2009. Since then Condit has held the interim welterweight title and Kampmann has rode a bit of a roller-coaster with his longest winning streak being three. Both men’s most recent losses came at the hands of welterweight contender Johny Hendricks, so both are looking to prove their worth and show why they should move up the ever expanding 170-pounds ladder.

My pick for Fight of the Month is definitely Benson Henderson vs. Anthony Pettis 2. The fact that the organization continues to re-air “The Showtime Kick” leading up to this fight is reason enough to be excited. Pettis won the lightweight title against Henderson in that fight back at WEC 53 in 2010 and was promised an immediate title shot when the organization was merged with the UFC. Unfortunately 3-years later and that promise did not come to fruition. Henderson on the other hand picked up three victories in a row to earn himself a title shot, in which he won and has since defended it three times. The first go round was a back and forth battle which will likely be the case in this fight. Henderson hasn’t show the most aggressive style in the lightweight division, in fact he hasn’t finished a fight since before the bout prior to the first Pettis one. In their eleven combined UFC fights, they have been awarded four “of the night” bonuses and this one is definitely a candidate going in to it.

On the fringe: Chael Sonnen vs. Mauricio “Shogun” Rua