Martin Kampmann (20-6) and Carlos Condit (28-7) have some things in common. First, they fought each other back in 2009 and they both think they deserved the victory. Secondly, they have both lost to Johny Hendricks, and thirdly they both have something to prove when it comes to the UFC’s welterweight division. I’m sure we can find more similarities between these two combatants and maybe “balls to the wall” fighting style should be the first thing we notice. In talking to Martin Kampmann he believes it’s that exact similarity that has put them in the Main Event for this Wednesday’s UFC Fight Night 27.

The UFC puts us up there because they know we put on good fights and Carlos puts on good fights. That’s why they put us up in that main event spot. Of course you’ve got to live up to that now, but I feel my fighting style and Carlos’ fighting style is perfect for that. We both come to finish the fight, so I think it’s going to be automatic, it’s going to be a hell of a fight.

Hell is a place Martin Kampmann has found himself on more than one occasion in the Octagon. To say this man has been in some wars is an understatement. There was a fight back in March of 2011 where “The Hitman” went toe-to-toe with Diego Sanchez but came up short due to a controversial decision to what was the fight-of-the night. Martin submitted Thiago Alves with a slick guillotine choke in 2012 and he KO’ed Jake Ellenberger at the Ultimate Fighter 15 Finale. You get in a scrap with Kampmann and you better be ready to fight for every inch of your life.

Unfortunately, the fight with Johny Hendricks at UFC 154 didn’t go according to plan and the Denmark native found himself in “lala land” sleeping on the canvas forty-six-seconds into the first round. It was a KO that came out of nowhere and propelled Hendricks into contendership and dropped Kampmann back down to the drawing board. It was a tough loss to swallow after going on an impressive three-fight winning streak. The same can be said for Carlos Condit who was at one-time fighting George St-Pierre for a title and is now on a similar rung of the welterweight ladder and looking up.

In the past when you ask Kampmann about future opponents he would have no problems telling you how much he would love to kick Nick Diaz in the face or one day fight GSP for a title. However, today it’s all about Condit.

I’m ready to beat however many guys I need to beat. First I’ve got to focus on Carlos Condit and then you can give me a new opponent and I’ll beat him too. One fight at a time, but of course my goal is the title, that’s my ultimate goal. Fighting in the UFC, that belt is the biggest thing you can get, but right now I’ve got a big task in front of me and that’s Carlos Condit. I will conquer that, I will finish that and I will get the win.

Condit vs. Kampmann 2 has a nice ring to it. It just needs a catchy tag line. That said, everyone likes a good sequel. The first showdown happened back in 2009 where the Dane squeaked out a split decision victory. Kampmann, who is not a big fan of judges to begin with, thinks that five rounds should be enough for him to finish Condit and give the judges a fight off. 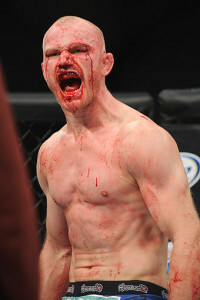 I’ve got a win over him and the first fight we had was a close fight. That was an action packed fight, so I would have loved to have had two more rounds in that fight so I could have gotten the finish. Everybody thought it was a close fight the first time and of course I’m glad the judges gave me the win. But Carlos Condit is still ranked at the top and he’s still one of the best fighters in the welterweight division, so beating him definitely helps me move up the ladder. I want to move up the ladder and get closer to a title fight; beating him in decisive fashion will put me there.

Sometimes sequel fights can over promise and under deliver, but when you throw these two guys into a cage there will probably be blood. Hey, I think I just thought of a catchy tag line. Condit vs. Kampmann 2: There Will be Blood! It’s the perfect scenario for Wednesday night television with the family. Invite your grandmother over, perch her in front of the television and introduce her to what will probably be a violent MMA fight. It doesn’t matter where the fight goes Kampmann believes he is ready for the kitchen sink.

I feel confident I can beat him and beat him in all areas of the game. I feel confident in my striking, my jiu-jitsu and my wrestling. I think Carlos Condit is a very well rounded guy and he’s dangerous everywhere. Even if you get a takedown on him, he’ll hunt for that submission from all kinds of positions. In the standup he’ll throw all kinds of unorthodox stuff, flying switch knees; he’ll throw spinning elbows and you’ve got to watch out. He’s a dangerous guy and that’s what makes this fight exciting – he’s a guy I enjoy watching fight, so getting to fight him one more time is exciting.

Both guys wanted this fight. They are both thinking about redemption, titles, and bonus checks. In some ways they mirror each other perfectly. In Joe Silva’s world it is a no brainer match up. So if you have nothing planned this Wednesday night, make sure to tune into UFC Fight Night 27: Condit vs. Kampmann 2: There Will Be Blood! Check your local listings.