The UFC makes their return to Brazil for a middle of the week card.

UFC Fight Night 28 goes down this Wednesday night from the Mineirinho Arena in Belo Horizonte, Brazil.

In the main event a pair of light heavyweights looking to climb the divisions ladder will square off, as Ryan Bader looks to hand Glover Teixeira his first UFC loss. In the co-main event countryman Ronaldo “Jacare” Souza will look to continue on his winning ways against Japan’s Yushin Okami.

MMASucka.com is back with our ‘Staff Predictions’, so check them out below and see if you agree with what we are thinking. For ‘Fight Night’ events we will only be doing the top three bouts. 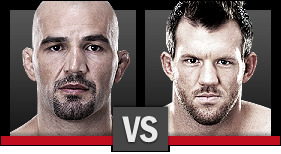 Jeremy – Does anyone really think that Bader has a shot against Teixeira? The closest odds for Bader to win are at +300 – that is a long shot to say the least. I personally would have liked to see Teixeira fight someone a little higher up the rankings than Bader to earn a title shot, but one can’t be denied with a decisive victory at UFC Fight Night 28. My pick is Glover Teixeira via first round TKO

Allen – All signs are pointing towards Teixeira to win this fight impressively and earn a title shot at light heavyweight. The only way that doesn’t happen is if Bader attempts for takedowns and tries to control Teixeira on the ground. He may be able to do that, but it’s tough to do that for 25 minutes. Teixeira is too powerful and has proven how dangerous he can be on the ground. Bader is just another victim. Glover Teixeira via second round submission by guillotine

Justin – Ryan Bader has always had the physical potential to do big things in the UFC’s Light Heavyweight division. Unfortunately, he’s fallen into the same trap as many other wrestlers and fallen in love with his mediocre striking. That’s a recipe for disaster against fighters like the division’s friendliest murder machine, Glover Teixeira, and it’s going to cost “Darth” dearly. Expect to see some brutality at its most brutal as Teixeira mauls his way into a second stanza stoppage before tenderly embracing and reassuring his fallen foe. Glover Teixeira via second round TKO.

Henry – First of all, Ryan Bader is a good fighter. Outside of his defeats to Jon Jones and Tito Ortiz (ugh!), he has performed pretty well in his fights. However, Teixeira is a beast. He’s proven that he is a force in the stand up and he has some submission skills as well. I see him winning decisively. Glover Teixeira by first round TKO

Suraj – Ryan Bader was on a solid run before he met Jon Jones in the octagon. Since then, he’s gone 3-2 with wins over Jason Brilz, Quinton Jackson and Vladimir Matyushenko. After losing to Tito Ortiz and Lyoto Machida, is Bader on his way to gate-keeping? If not, a win over Glover Teixeira is the only way for Bader to change the course of his career. Teixeira, who is coming off a great submission win, has proven he can win a fight by knocking you out or choking you. He has been good against great competition and should continue this trend as he makes his way into contention. Even though Bader has shown all-around skill and has only lost to some of the best fighters in history, Teixeira has the skill to get himself into the light heavyweight title picture. Glover Teixeira via first round KO.

Jeremy – An interesting match-up to say the least. Okami and Souza both utilize their respective ground games, but I see Okami using his a tad bit more efficiently in this fight thank “Jacare”. Souza looks to take it to the mat and submit his opponent, while Okami looks to grind away at his opponents using his wrestling prowess and effective top game. My pick is Yushin Okami via Unanimous Decision.

Allen – This is the matchup I’m looking forward to. We’ve seen how Okami uses his size to overpower his opponents into the cage or to the ground. That will be hard against someone as big as him in Souza. Everyone has touted Souza, as the next big thing in the middleweight division. This should be a chess match with both fighters struggling for top position. In the end, Souza’s ground game will be too much to handle. It will be hard fought victory for him. Jacare Souza via Unanimous Decision

Justin – Toughest fight of the night to call, in my opinion. Both men have are tough as nails, physically gifted, and have heart for days. In fact, I’d dare say that Ronaldo Souza has more heart than anybody else at 185 lbs., and I’ll direct you to his 2004 match with Roger Gracie at the World BJJ Championships, which he won after Roger broke his arm. Knowing that, it’s hard to bet against Souza, even against a strong wrestler like Okami. It will be gritty, it will be a war, but in the end, I think it will be a decision victory for “Jacare.” Ronaldo Souza via Unanimous Decision (29-28 x3)

Henry – This is a tough one. On one hand, you have Souza who I think has the advantage in the stand up and submission skills. On the other hand, Okami has the wrestling and the shut down type of style. However, Brazilians tend to perform on another level when fighting in front of their home country so I’ll take a pumped up Souza for the victory. Ronaldo Souza by second round TKO

Suraj -Ronaldo Souza is one of my favorite up and coming fighters in the UFC. Jacare compiled a Strikeforce record of 7-1, only losing to the promotion’s champion Luke Rockhold. Even though Yushin Okami is his toughest competition yet, the Brazilian has the skill, strength and endurance to challenge Okami’s submission skills. Since 2006, Okami has only lost to Jake Shields, Rich Franklin, Chael Sonnen, Anderson Silva and Tim Boetsch. Jacare will soon find himself in that category of fighters as well. Both fighters can go the distance, and while Jacare should withstand Okami’s striking, Okami will have some trouble keeping him off his limbs. Okami has never lost by submission, but if there’s anyone on the planet that can do it, it’s Jacare. Ronaldo Souza via submission in the 2nd round.

Jeremy – Benavidez is ranked on many people’s featherweight lists number two in the division right below champ Demetrious Johnson. He is also a very high favorite in this match and should take home the win very easily. With Team Alpha Male gaining Duane Ludwig as the team’s head coach they have gone undefeated and this bout should be no different. His striking has improved and his foot work is out of this world.My pick is Joseph Benavidez via second round submission.

Allen – It’s nice to see the flyweight division being highly featured on this card. This is a mismatch though for Formiga. He’s not a great striker and hasn’t fought a flyweight quite like Benavidez. With Duane Ludwig improving his striking, we are going to see Benavidez mix his strikes up more to along with his takedowns. He isn’t as one dimensional, as he was a year ago by being more dangerous on his feet. This will be a good learning experience for Formiga. Hopefully this sets up Benavidez in a title fight with Demetrious Johnson. Joseph Benavidez via unanimous decision

Justin – As you move up the rankings of the flyweight division, the difficulty faced in each successively higher-ranked opponent goes up in orders of magnitude. That is why one can’t help but feel pity for submission ace Jussier da Silva as he goes on to face the 1/3 of the Team Alpha Male’s young gun contenders group (AKA “Team Mend-Avide-Shaw”), Joseph Benavidez. There will be great violence as Benavidez’ “Bang” Ludwig-enhanced striking will put “Formiga” out of his misery before he even gets a chance to try and pull guard in an effort to get it to the ground. Joseph Benavidez via 1st round TKO.

Henry – Like I predicted in the previous card with Mendes, the team Alpha Male fighters have been fighting on another level since “Bang” Ludwig took over. I don’t think Formiga will have much to offer Benavidez in this fight. Joseph Benavidez by first round TKO

Suraj – Jussier da Silva is coming off a decision win against Chris Cariaso, but has never knocked out an opponent. Both him and Joseph Benavidez have shown great skill on the ground, and can go the distance with ease. However, the x-factor in this fight is Benavidez’s striking, which will be much better than da Silva’s. Benavidez is on a two-fight win streak and will look to continue his winning ways as he approaches title contention once more. Joseph Benavidez via 2nd round TKO.