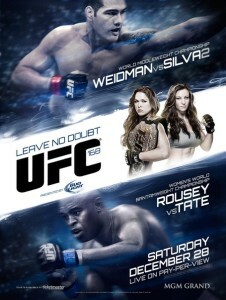 On Tuesday the UFC held a news conference in Las Vegas, as part of the UFC 168 ‘World Tour’.

The event was free and open to the public and featured main event fighters Chris Weidman and Anderson Silva, as well as UFC President Dana White.

UFC 168 goes down on December 28 from the MGM Grand Garden Arena in Las Vegas. The organization is on a seven-city ‘World Tour’ to promote the rematch between UFC middleweight champ Weidman and the man he beat, Silva.

Check out the full replay below.

Check out the video of the world tour press conference, and stay tuned right here at MMA Sucka for more live streams as well as videos highlighting the top fighters, commentators, coaches, promoters and other names in MMA and combat sports. We also bring you great offers on the latest MMA products and merchandise. You can also subscribe to our youtube channel for regular updates and all the latest fight news. You can also check out our sister site, at TheFightBuzz.com for the latest from the world of MMA and other combat sports.