ONE Fighting Championship™ (ONE FC), the world’s most exciting Mixed Martial Arts (MMA) promotion, is proud to announce that Catalyst Media Group, one of the world’s top sports program distribution companies, will be the exclusive content distribution partner for ONE FC starting in January 2014. The partnership entitles Catalyst Media Group to be the exclusive distributor for ONE FC’s live shows and archives around the world.

Catalyst Media Group Ltd. is a Hong Kong based company that acquires, creates and develops Asian-based sports and entertainment properties.

The company distributes premium quality sports programs to media outlets around the world. Catalyst Media Group has a team of seasoned media executives that have significant experience in areas of consulting, brand development, media content sales and sponsorship delivery focused on Asia. The company is jointly owned by RSE Ventures and Patrick Murphy.

A sports media veteran, Murphy was previously with TEAM Marketing in Switzerland where he helped fuel the explosive media rights growth of UEFA Champions League and the UEFA Europa League. He was previously at News Corp. and ESPN STAR Sports in Asia creating, acquiring and developing sports events. He has a proven track record in creating new business and monetizing sports content gained through over 20 years experience working in the industry.

“ONE Fighting Championship™ has reached an incredible level of production and fighter recruitment that is unprecedented in MMA,” Murphy said. “Catalyst Media Group felt that it was a critical juncture for us to offer our experience and worldwide distribution expertise to ONE FC. Having assisted in the development of top sporting properties globally in my 20 years of experience, the potential of ONE FC is an opportunity that I couldn’t pass up.”

CEO of ONE Fighting Championship™ Victor Cui stated, “Catalyst Media Group is the best there is in media distribution globally. The company has the best talent available in the business. ONE FC only partners with the best and I’m proud to welcome Patrick Murphy and Catalyst Media Group on board as our official partner.”

ONE FC has been driving the explosive growth of MMA in Asia since its inception in 2011 and has cornered the market with sold-out events across Asia and featuring the top fighters from around the world. Currently holding 90%+ market share in Asia, ONE FC is Asia’s largest MMA organization, and the leading brand for MMA in Asia. 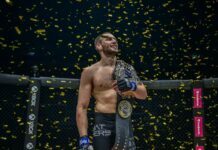 What We Learned From ONE on TNT IV