ONE Fighting Championship plans to end 2013 with a bang, and the promotion has wasted little time in making announcements for its forthcoming event.

While ONE FC 11: Total Domination is set to hit the Singapore Indoor Stadium later this month, November will see the organization cross borders into Kuala Lumpur, Malaysia for its 12th installment, titled “Warrior Spirit”. 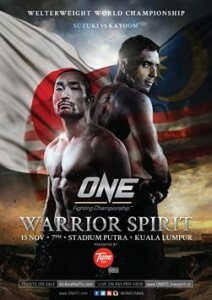 And better yet, ONE FC 12: Warrior Spirit will be headlined by a Welterweight title showdown between hometown favorite Adam Kayoom (4-1) and Japanese vet, Nobutatsu Suzuki (10-1-2).

“We are coming back to the capital of Malaysia to put on one of the greatest fight cards in Asian MMA history, ” ONE FC CEO Victor Cui, stated. “We will finally settle the question of who deserves to be called the top Welterweight fighter on the planet.  ONE FC is putting together a fight card that will blow away the millions of passionate fight fans all around the world.”

Kayoom may have only five professional MMA bouts to his credit, but the 35-year-old’s pedigree is one not to go unnoticed. With black belts in Brazilian Jiu-Jitsu, Karate, Taekwondo and with numerous pro Muay Thai titles under his wing,  Kayoom is certainly one of the most dangerous names on the ONE FC roster.

And the task set in front of Kayoom is not an easy one by any standards. Nobutatsu Suzuki made an astounding ONE FC debut at ONE FC 9: Rise to Power, gaining a TKO win over former UFC & PRIDE vet, Phil Baroni. In fact, the 36-year-old is yet to see the third round in any of his bouts, with all ten of his wins coming via stoppage.

With that said, ONE FC 12: Warrior Spirit goes down on November 12 at the Putra Indoor Stadium in Kuala Lumpur, Malaysia. Kayoom vs. Suzuki for the 170-lbs belt will serve as the event’s headliner.