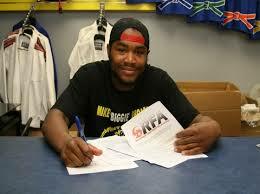 The welterweight title is up for grabs inside the RFA Octagon this Friday night as Mike “Biggie” Rhodes takes on Alan Jouban.

The Team Roufus Sport talent has lost just one fight in his very young mixed martial arts career and that was to the talented Brandon Thatch, who has since been signed by the UFC. The loss to Thatch was his first bout inside the RFA Octagon and it came on just eight-days notice. “Biggie” took the loss very seriously and bounced back at RFA 8 against Benjamin Smith winning via early first round TKO.

That night was incredible. It was a night  of redemption. Taking that Thatch fight on eight-days notice, cutting all that weight, people probably though this kid has big cahonies but I didn’t win. It was hard to take and I take losing seriously and it hurt. So it was redemption, I practiced that right hand and with having so much confidence in my wrestling as he is shooting he ran in to that perfect punch. It felt good. It was one of those punches you can feel going through the glove and piercing his skin. It was crazy, it was raw and I was caught in the moment.

Jouban also has one loss on his record, but it was early in his career and has since won six straight. That means nothing to Rhodes, as he feels that he has the advantage everywhere in this fight.

I have the advantage everywhere. My striking is better, he is a striker but he lacks the technique to put me away on the feet. My skillset is more diverse, I have way better boxing and my defence is a lot better. And there is no doubt my wrestling is better. The BJJ is where we are equal but I think my wrestling will be able to hold and stop positions. I think  I am the better fighter and I am going to showcase that on October 25.

Rhodes feels like Jouban will look to take this fight to the ground, as he’s a purple belt under Eddie Bravo. The stand-up skills of Rhodes will frustrate him and if he has to – he believes his wrestling is better as well.

Once you start hitting a striker in the face and frustrate them, they are gonna shoot. And he is a purple belt in BJJ under Eddie Bravo he is going to get frustrated and shoot. MY wrestling is better so I am going to keep it on the feet. However if he is doing something on the feet I don’t like, I have the wrestling to put him on his back. He is a striker  and he says he wants to bang so I am ready to put on a show.

The man from Waterloo, Iowa trains with some of the best in the sport. He not only trains with, but he also lives brothers – Anthony and Sergio Pettis. Both are champions and the younger Pettis, Sergio, was just signed by the UFC. He feels the pressure from those two to win the belt, but it is also motivation to have them behind him. 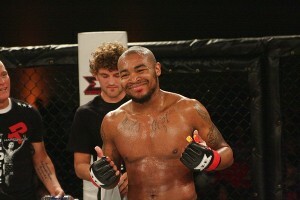 Fighting for a title is awseome but it is an after though. If I dont win the fight I dont win the title. The only pressure for the title is Anthony just got his and Sergio got his from the RFA and I live with those guys. So they tell me ‘win the belt or you have to move out’ so that is all the motivation I need. Getting that strip around my waist will be vindication for all the hard work I am putting in. I get my hand raised, I get that belt.

Many fighters will dream about how they will finish the fight, and Rhodes is no different. But he believes that his dreams and his reality will play out to be the exact same way – with RFA gold around his waist.