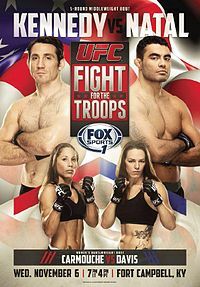 From cornering your favorite fighter to having dinner with the Octagon Girls, Ultimate Fighting Championship fans can now place bids on exclusive UFC auction items at ufcfightforthetroops.com, with the auction closing at 8 p.m. PT on Thurs., Nov. 7. The online auction to raise money for the United States Armed Forces is in conjunction with the UFC Fight for the Troops event that will take place live from Fort Campbell, KY on Wed., Nov. 6 at 7 p.m. ET / 4 p.m. PT on FOX Sports 1. Fans can also make donations online or by calling 1-877-747-4376 (HERO).

UFC to host Fight for the Troops online auction

In addition to exclusive UFC autographed merchandise and memorabilia, fans will have the chance to bid on an East Coast and West Coast VIP experience package. The package features airfare, accommodations and tickets to a UFC event for the winner and a guest, dinner with UFC President Dana White and Octagon Girl Arianny Celeste, a meet-and-greet with UFC fighters and Hall of Famers, special access to weigh-ins with a behind the scenes tour, and a once-in-a-lifetime experience to walk out with a fighter, and, should the fighter win, the opportunity to enter the Octagon alongside them.

Several celebrities have stepped up in support of the UFC’s Fight for the Troops event. The Red Hot Chili Peppersdonated an autographed guitar, drum head and album. Chef and television personality Anthony Bourdain will fly a fan and their guest to New York City for a one night stay including lunch with him. Country singer Blake Shelton, surfboarder Kelly Slater, skateboarder’s Tony Hawk, Rob Dyrdek and Paul Rodriguez and reality star Jenni “JWOW” Farley have also contributed autographed items.

Highlights of UFC’s Fight for the Troops online auction include:

Proceeds from the online auction and donations will go to the Intrepid Fallen Heroes Fund and The National Intrepid Center of Excellence, an advanced research facility in Bethesda, MD dedicated to the diagnosis and treatment of military personnel and veterans suffering from traumatic brain injury (TBI) and psychological health issues. To date the UFC has hosted two UFC Fight for the Troopevents (2008 and 2011) that have help raise over $4 million.