Five bouts have been made official for the UFC’s first trip to Singapore in January.

At a press conference held in Marina Bay Sands on Tuesday, the UFC made announcements of the fight card, including the addition of five stellar contests.

As previously announced, Jake Ellenberger (29-7) locks horns with promotional newcomer Tarec Saffiedine (14-3) in the main event, a bout consisting of huge ramifications in the top ten rankings of the UFC’s 170-lbs division. On the heels of a Unanimous Decision setback against top contender Rory McDonald in July, Reign MMA native Ellenberger looks to get back in the win column. Still a massive draw in the Welterweight ranks, Ellenberger went 8-1 prior to that defeat under the UFC banner. The 28-year-old possesses a supreme Boxing game with outstanding wrestling credentials, something that his opponent Tarec Saffiedine will have to restraint on Januray 4 .

Speaking of Saffiedine, he will be making his official UFC debut. The former Strikeforce 170-lbs champ will be spending some parts of his training camp at Singapore-based Evolve MMA, as he looks to link up with former Team Quest member Heath Sims and the multiple world champions that the gym has at its disposal. The Belgian has, furthermore, never been stopped in his pro MMA career thus far, making this bout with Ellenberger a must-watch for any MMA fan. 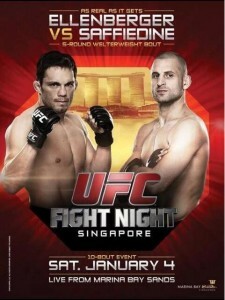 Shunichi Shimizu will be hoping to keep his current win streak alive when he takes on Kyung Ho Kang. The 28-year-old will be spending some time at Phuket Top Team prior to his UFC debut on January 4. A former ZST vet, Shimizu is somewhat of a submission ace, with nineteen of his twenty-eight victories coming via submission.

Kang, on the other hand, looks to rebound from a Unanimous Decision set-back he suffered against Chico Camus at UFC 164. The former ROAD FC staple trains with the likes of Dong Hyun Kim at Busan’s Team M.A.D., and will be looking to use that experience to get the better of his opponent come fight night.

The rest of the fight card includes Katsunori Kikuno vs. Quinn Mulhern, and Hacran Dias vs. Tatsuya Kawajiri which were previously reported.

UFC Fight Night 34 (AKA UFC: Singapore) takes place January 4 at the Marina Bay Sands in Singapore. This will be the organization’s second event in the South East Asian region.