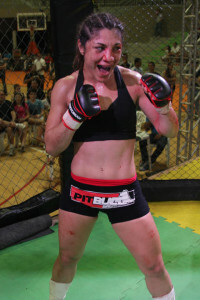 After original opponent Aleksandra Albu was forced to drop out due to injury, Julie Kedzie was forced to sit, wait, and post memes on her Twitter while waiting for a new opponent. Well, the time has come, and Kedzie will now be taking on Brazilian prospect Bethe Correia.

Julie “Fireball” Kedzie (16-12) is the pioneering woman at Jackson’s MMA. Active since 2004, Kedzie is known for her fearless, ovaries-to-the-wall style that has entertained even the likes of UFC President Dana White. Currently on a 3 fight losing skid, Kedzie will be looking to turn things around with a win over Correia. Will she be able to get the duke over the game Brazilian?

Bethe “Pitbull” Correia (6-0), trains with Bellator’s Patricke and Patricio Freire at Pitbull Brothers gym in Natal, Brazil. The 30 year old has yet to fight outside of Brazil, but has notched 5 decisions and 1 TKO in her fights to date. “Pitbull” will be looking to make a splash with her first fight abroad, and for the UFC. Will she be able to do so against “Fireball?”

UFC Fight Night 33 goes down on Dec. 7th, at the Brisbane Entertainment Centre in Brisbane, Queensland, Australia. The card is currently headlined by a heavyweight bout pitting lead Blackzillian Antonio “Bigfoot” Silva against “The Super Samoan” Mark Hunt. Stay tuned to MMASucka.com for more on this and other upcoming events.