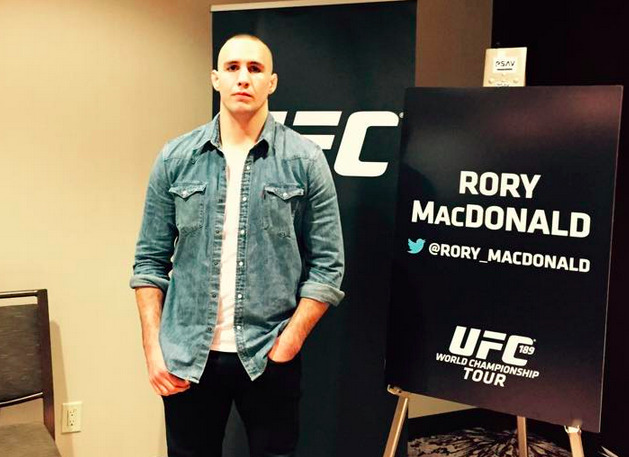 In 2012, everybody was raving about Rory MacDonald. Obviously training with someone as great as Georges St. Pierre is going to increase your profile. He was still living up to expectations in the octagon. In both of his wins over Che Mills and BJ Penn, they were each completely one-sided affairs. The victory against Penn was more prominent because we’ve never really seen Penn get dominated like that before. People forget that Penn actually won the first round against Nick Diaz.

After a disappointing 2013, Rory MacDonald is on track to rebound in 2014

MacDonald was starting to become one of the top welterweights in the world. He was set to face Carlos Condit at UFC 158, but once again had to pull out being plagued by injuries. That led to a high-profile fight on Fox against Jake Ellenberger, which was essentially the people’s main event. Nobody was really buzzed for the actual main event between Demetrious Johnson and John Moraga, who won his last fight on a Facebook preliminary bout. That fight turned out to be a complete dud, which had most people groaning. While he fought an intelligent fight utilizing his reach advantage, it was disappointing to see MacDonald not push the pace as much as he did in past victories.

Eventually most people got over the lackluster performance because Ellenberger is such a talented wrestler and has one punch knockout power. A matchup with Robbie Lawler would surely get him to fight more aggressively. While Lawler’s takedown defense is underrated, he doesn’t shoot in for a takedown very often. MacDonald wouldn’t have to worry about being taken to the ground compared to his past fight against Ellenberger. Once again, he fought very conservatively trying to utilize his reach advantage. It was the same redundant jab or straight left followed by a leg or front body kick. He would mix it up by going for a takedown, but that was to be expected.

His attacks were becoming redundant, which is why Lawler was never fazed once during the fight. He wasn’t attacking the body as much as he did against Penn. While he did manage to complete five takedowns, nothing significant came out of them. Lawler outclassed him in the striking department, as most would expect. MacDonald left his chin out far too often in the third round, which led to him being knocked down by a left uppercut. Even if he won that fight (Lawler won by split decision), you could still see the fans continue to lose faith in him. Thankfully the judges made the right decision, which was shocking considering what happened two fights later at UFC 167.

MacDonald admitted that his mental state wasn’t right in 2013. He didn’t have the fire, which led to him not enjoying his last two fights. While his personality turns people off, you have to respect him being always candid in his interviews. After his interview with Ariel Helwani, it made me believe that we’ll finally see his aggressive style return. That aggressiveness was on display when he annihilated Mike Pyle with a few single leg sweeps followed by vicious ground-and-pound. The same can be said for his victory against Che Mills, when he was absolutely relentless on Mills back to get the finish. Those fights showed “the fire” that he was going to take chances and leave no questions who was the better figher.

That’s what needs to happen for him against Demian Maia. It’s clear that MacDonald should be a heavy favorite in this fight. Even though Maia is world class at BJJ, MacDonald is a more well rounded fighter who can hold his own on the ground. This is a fight, where he needs to take chances and make a statement. We all know that Maia’s striking doesn’t present much of a threat.

What impresses me the most about MacDonald’s striking is how precise his punches are. You rarely see him miss widely and put himself in a position to get tagged by a counter strike. That did occur against Lawler, but before that you never saw him get knocked down like that. He was still relatively new in facing top-level competition, when he lost to Condit back in 2010. MacDonald knows how to keep himself composed, while abusing his opponents with his strength and reach advantage. That is one of the many benefits of training with St. Pierre. Who better to learn it from, when you have such great physical tools?

You never want to judge a fighter off one fight. That is one of the silliest assessments you can make when breaking down a fighter’s chances of winning or losing. I’m not looking at his loss to Lawler as a justification of labeling him as overrated or can’t handle pressure. I’m looking at it from a perspective, where you can’t say he’s reckless or his ground game isn’t really that good. Lawler is one of the most dangerous strikers in the world today. When you start getting tagged, you become sloppy and start going for desperate takedowns that get telegraphed instantly. That’s what happened in the infamous third round, where he was close to being finished.

One round doesn’t change the fact that he’s still very composed as a fighter and is an excellent grappler. You saw how well he dominated Mills and Pyle from taking them down with single leg sweeps to the ground-and-pound. Who could forget how he slammed Nate Diaz down on three occasions with a German suplex. Regardless of Diaz having no business fighting at 170, it’s still impressive for anyone to suplex someone three times in a fight. Then when you look at his wrestling ability, he uses the single leg sweep so efficiently. Once again, it comes from utilizing his athleticism and being stronger than most welterweights. That’s how he roughed up Condit in the first round and finished Pyle.

Maia is arguably the best grappler that MacDonald has ever faced. That is probably the only intriguing aspect of their upcoming fight from a stylistic standpoint. While grappling is one of his strong points, I can’t see Maia controlling this fight. After watching Jon Fitch’s last two fights in WSOF, the buzz about that victory has simmered down. Jake Shields got the better of several exchanges in their bout last October. MacDonald has more weapons to use in his arsenal compared to Maia.

If he remains focused and keeps the fight standing, this is his fight to lose. He’s not facing a world-class striker or a top-level wrestler with one punch knockout power. Maia is one of best BJJ practitioners in the world, but can that be effective against someone as strong and technical as MacDonald?  It wasn’t effective when he fought Chris Weidman, who is similar to MacDonald besides being an All-American wrestler and having more of an aggressive style.

Many people including myself have been very critical of MacDonald over the past year. We’ve been hearing about all the hype about him being the next big thing and how he’s the “Canadian Psycho”.  He didn’t live up to expectations in 2013 and now will have to work his way back up.

All he needs to do is take more chances and keep evolving as a striker. There is nothing wrong with having strict game plans, that’s how fighters win championships. If he could be less conservative and not always rely on timing, then his stock should accelerate once again. His striking isn’t good enough yet to rely on just timing and counter striking like Lyoto Machida or Anderson Silva.

He still has tremendous upside and could very well be fighting for the title by the end of 2014 or beginning of 2015. There aren’t many welterweights that are more technically sound and well rounded as him. He just needs to put it all together and start putting on dominant performances. He knows that, here is one final quote from the same interview last November with Ariel Helwani.

“I really think so. I have that fire back and it’s a good feeling,” MacDonald vowed. “When I think about fighting, I want to go in and I want to smash someone. I want my next opponent to be crying in the backroom. I want them to be scared of me. I just want to hurt someone, and that’s the kind of mind frame you have to be in. 2013 wasn’t like that for me. But now it is.”

With St. Pierre out of the picture, he’s free from all the pressure of possibly fighting his training partner. His mental state seems to be in the right place, now it’s time for him to prove that he’s someone that should be  feared.