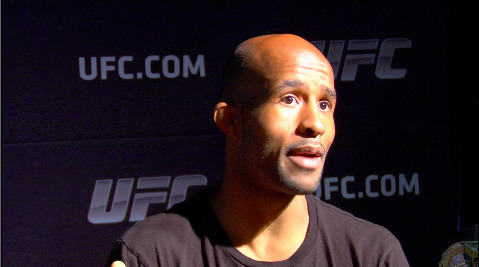 Vancouver, B.C. – The UFC flyweight championship was up for grabs, as champ Demetrious Johnson took on Ali Bagautinov in the main event at UFC 174.

The champ opened up with a quick leg kick. Bagautinov threw some heavy shots, but Johnson was able to use his speed to back out of the way. As “Puncher” came forward, Johnson landed a nice counter right punch. Again Bagautinov rushed forward, but hit nothing but air. Johnson grabbed the Thai clinch with under thirty seconds left and landed a few clean knees. With under ten seconds left, Bagautinov took Johnson down, but he was able to get right back up.

Johnson looked for a takedown, but couldn’t get it, so he threw a nice knee to the body. Johnson landed a well timed head-kick but didn’t stun Bagautinov at all. These two were so fast with the action, it was hard to keep up at times. Both Johnson and Bagautinov landed big head punches, but continued to push forward. With Bagautinov looking for the single leg, Johnson landed a short jumping knee. The round ended with the two clinched against the cage.

Johnson rushed forward early in the third and landed a couple of punches, as well as a high kick and then Bagautinov clinched up. Both fighters traded right hands on an exchange in the center of the cage. Johnson’s speed seemed to increase a little in the third frame and he seemed to have found his range. Bagautinov landed a takedown, but Johnson got right back up to his feet. Johnson landed some short elbows and a knee from inside the clinch to end the third round.

The championship round got underway with Johnson and Bagautinov taking to the center of the Octagon. Johnson once again landed a nice knee and elbow from the clinch. Midway through the frame, Johnson landed a number of stiff body kicks. Off a slip from Johnson, Bagautinov landed a clean left hand, but didn’t faze Johnson. The round ended with both fighters looking to get the takedown.

The fifth and final round got the crowd cheering for the first time this fight. The clinch for Johnson was the difference maker in the fight and continued to be the entire fifth round.