Brazilian Jiu Jitsu organization Metamoris has officially announced a number of matches. On Monday’s edition of “MMA Hour” with Ariel Helwani, Metamoris President Ralek Gracie confirmed the main event and co-main event, as well as a number of other fights.

“We’re gonna have Chael Sonnen vs. Andre Galvão, such a clash of styles. Chael brings so much to the game with his style of approaching his fights and also how he can surprise everyone with something he does during the fight.”

UFC heavyweight Josh Barnett will square off against Dean Lister in the evening’s co-main event. The President is so uncertain as to how this match will play out, as both fighters are heel-hook experts.

“I can’t even know what to say about that fight. They are two heel-hook beasts in the game. Lister hasn’t been submitted in 15 years.”

A fight that everyone in the BJJ community has been excited to see for some time is between Keenan Cornelius and Vinny Magalhaes. This bout was expected to go down at Metamoris 3, but Magalhaes was forced out of the match with a serious staph infection.

Metamoris 4 will go down on August 9 from the Peterson Automotive Museum in Los Angeles, California which is the same venue as Metamoris 3. 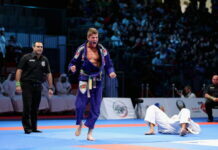 The Rise and Development of Brazilian Jiu Jitsu