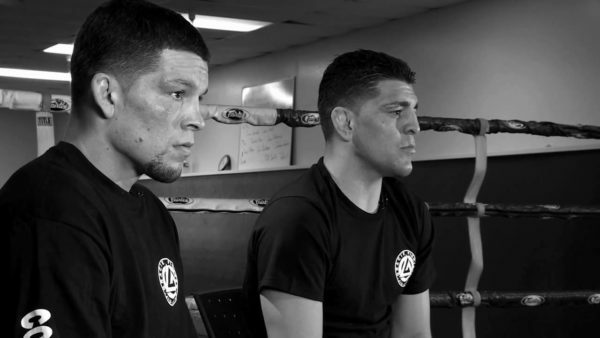 Over the past few week, reports of Nick and Nate Diaz making a return to the Octagon have bloomed from several sources and there seems to be some truth to it. While Nate Diaz and Myles Jury have been exchanging words, Nick Diaz has gone back on his title-only-clause and has stated he would fight Georges St-Pierre or Anderson Silva. Unsurprisingly, both Diaz brothers have a list of demands with regards to their next bouts, and when, who and how much will continue to be concerns for both fighters.

Nate Diaz recently got into a bit of a feud with Jury through twitter. MMASucka detailed the back-and-forth in this piece back on June 30th. By the sounds of it, Nate is chasing a bigger pay day and after doing the research, he might actually have a point. Depending on what he would be getting against Jury, Diaz received a “reported income” of $30,000, which includes his $15,000 win bonus against Gray Maynard.

Is Nate Diaz worthy of a higher pay grade? He is 17-9, the TUF 5 winner, and has fought for both the WEC and UFC lightweight belts once a piece. Even more impressively, Diaz won a bonus in each of his first seven fights, and has 12 bonuses in total. He is a fan favorite and has been a solid face for both the UFC and MMA as a whole. Maybe it is time for the UFC to throw this Diaz a bone, as he seems ready to fight if the price is right.

In the case of Nick Diaz, things seem to be getting a lot more interesting. While he constantly suggested that he would only return for a title shot, Diaz has turned a new leaf, as the pay day from fighting GSP and Silva seems to be substantial enough. There have even been reports suggesting that Diaz is in the midst of signing a new contract and should be fighting by the new year. If this is true, it almost makes perfect sense that his first fight could be against GSP or Silva, as both fighters could make a return around the same time. He believes he has already earned himself a title shot and only wants to fight the big names of the sport.

Is Nick Diaz not a big name of the sport? His accomplishments speak for themselves and his run through Strikeforce allowed him to fight BJ Penn upon his return to the UFC. It was after defeating Penn that Nick Diaz scored two straight UFC welterweight championships against Carlos Condit and GSP before ‘retiring’. On the other hand, Diaz needs to start showing a bit more respect for the sport if he hopes to make the same money as other big name fighters. Failing drug tests and missing scheduled UFC events is just not an option, and it’s time for both the UFC and Nick Diaz to come to terms on how the rest of his MMA career should play out.

As a huge fan of this duo, nothing would be more pleasing than to watch them get back in the Octagon. Their love’em or hate’em persona has continued to win fans over, and their ability to back it up with world class skill makes them who they are. While their attitude and lifestyle may get the best of them, they are fighters who belong in the UFC and it is time for some kind of peace offering to be made. Nate Diaz may deserve more money based on his last performance and Nick Diaz seems ready to go by the year’s end. If the UFC meets the demands of the Diaz brothers, it is imperative for them to uphold their end of the bargain, or watch their appeal as MMA fighters continue to diminish.