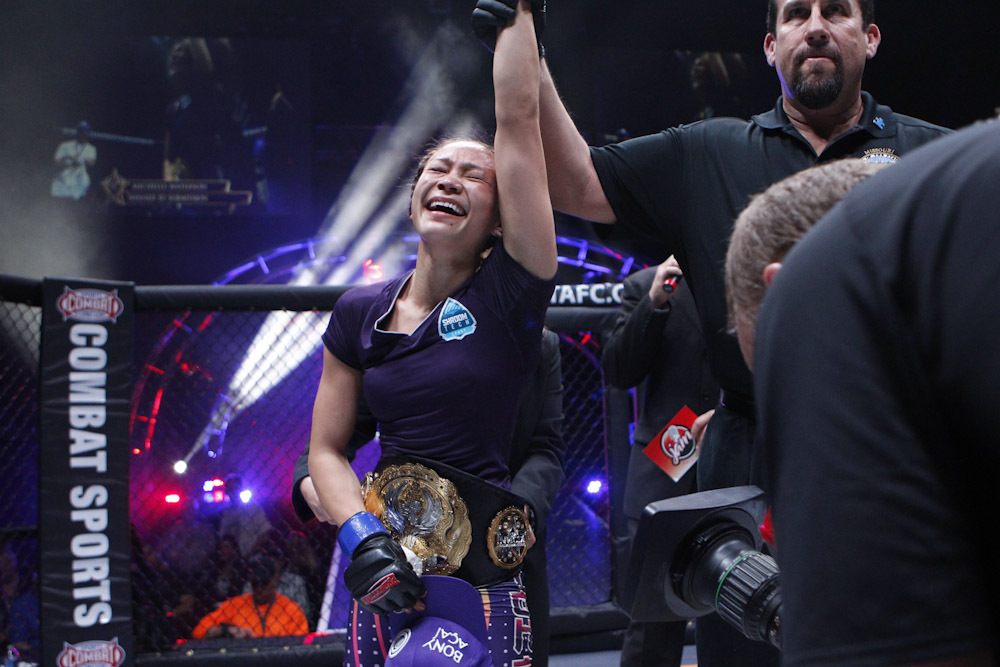 Invicta FC returns this Saturday night and for the first time fans will be able to catch all the action on UFC Fight Pass.

The main event at Invicta FC 8 is between the Atomweight Champion Michelle “The Karate Hottie” Waterson and Japanese veteran Yasuko Tamada. This will be Waterson’s first title defense since taking the belt from Jessica Penne at Invicta FC 5 back in April of 2013.

The 28-year-old had seventeen-months to sit around and wait to get back inside the cage. Not only was she inactive, but the organization hasn’t held an event since December 7.

Even though there was the long lay-off, Waterson said she wasn’t just sitting around, in fact she did the complete opposite.

“Ya know the usual drinking — no, ha ha. I’ve been spending a lot of time getting better. After you get the championship belt you feel like there is a target on your back,” Waterson told Sucka Radio. “Everyone is gunning for you, just like I was gunning for Jessica. I had no time to slack, I needed to get better. I’ve been working my strength and conditioning, I’ve been working my wrestling and just working on becoming an all around better fighter.”

During the year and a half off, “The Karate Hottie” had time to reflect on her very exciting championship winning bout against Penne. The fight didn’t come without some hiccups for her, as she was almost finished in the third round with an extremely tight armbar. Her willpower proved that she had the tenacity of a champion and that prevailed in the end.

MMASucka.com spoke with Waterson’s opponent, Tamada, who stated that this will definitely be her ‘toughest fight to date.’ She also said fighting in America has always been a dream for her. Waterson made it crystal clear however that the belt will not be leaving the country.

“I’m real eager to get back in the cage and so I’m hungry. This is my first title defense, so I’ve been training really hard. I don’t want to let that belt go — especially to someone that doesn’t live in the States. You know I keep that belt here in America.”

Being a 105-pound fighter, you would think there aren’t too many training partners for “The Karate Hottie,” but she said there are not only a good group of girls, but she also trains with some of the lighter fellas as well — including UFC flyweight contender John Dodson.

“John [Dodson] is definitely one of my great training partners and his little brother — his little big brother, I train with him a lot and there are a lot of up and comers that are smaller as far as the guys go. Jodie Esquibel is another 105’er that is at the gym and then we also have Celine Haga who came over from Norway and she’s actually a 105’er too. We have Emily Kagan, she’s a 115’er, so there’s actually a good group of girls that are my size that I can get in there and scrap with.”

When she said that she trained with the men, a lightbulb went off and Julianna Pena’s name popped up. No, Waterson has never been injured training with an overzealous male fighter and there is one reason for that — ‘The Regulators’.

“No, no, no not at all. It’s funny, when you have a gym like Jackson’s there’s always a guy that’s new that wants to get in there and prove a point. Sometimes they feel like they need to do something. I remember when I first started training at Jackson’s there was a guy that was going just a little too hard (they call me ‘Peanut’ at the gym). The guy was going a little too hard with Peanut, so we have these other guys we call ‘The Regulators’ . So then we just put them in with The Regulators the next round and straighten them out right away.”

At Invicta FC 8, not only will Waterson be fighting in the evening’s main event, but her training partners Jodie Esquibel and women’s veteran Tara LaRosa will also be featured on the fight card.

It isn’t too often that a numerous fighters at one camp are all peaking at the same time, so Waterson was lucky to have a few different shoulders to lean on.

Listen to the full interview with Michelle Waterson on this week’s episode of Sucka Radio.