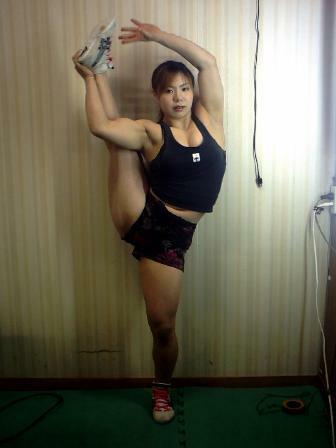 Japanese fighter Rin Nakai stands only 5-foot-1-inch, but don’t let her height fool you. She is a powerhouse in the bantamweight division, and a finisher, with ten of her sixteen wins coming by way of TKO or submission. She is currently undefeated and will try to keep it that way, welcoming Miesha Tate to her home country. UFC Fight Night Japan will go down in the Saitama Super Arena on September 20.

She has never fought overseas, but this is not her first time fighting a non-Japanese. Signed to the promotion “Pancrase,” she won the title “Queen of Pancrase” in 2012 against Danielle West, and defended it three times, against Brenda Gonzales, Tara LaRosa, and Sarah D’Alelio. She also holds the “Valkyrie Open-Weight” title.

Nakai lives in Ehime, Shikoku, one of the southern islands that make up Japan. She fights out of “Pancrase Venus,” otherwise known as Shooto Gym Shikoku, owned by former fighter and now head coach Kancho Usami. “I came to his gym when I was 19-years-old,” she told MMASucka. “I trust him with every aspect of my training.”

Nakai started her journey into martial arts when she was three years old. Inspired by her older brother who did Judo, she also wanted to try. She practiced all throughout elementary, middle and high-school. She has always been a natural athlete. “I did gymnastics for six years,” she said, describing doing the two sports simultaneously. In middle school when she had to choose between gymnastics and Judo, she actually chose gymnastics. However, her parents went ahead and forced her to quit it and continue with Judo. Sad at first, she worked hard and eventually ranked “third place” nationally.

“Now that I’m thinking back. At the time I was just a child, so I didn’t really understand the significance of anything. I just did my best to train and fight as hard as I could.”

She went pro in 2006, with the organization Pancrase. “Rather than me thinking I wanted to go pro, I feel like it happened naturally. The people around me helped make it possible, and I left myself in their hands.”

She faced Asuka Ito, who had been pro for five years already. Nakai won by TKO doctor stoppage at one-minute and twenty-five-seconds into the first round. It was a mostly striking battle, and a big upset, considering it was her debut and she had mostly only Judo experience. Nakai then proceeded to thrill the audience by doing backflips in the center of the ring.

Five fights into her career, she suddenly disappeared from the MMA radar for two years. She reappeared having gained fifteen pounds of muscle, and began competing in open-weight or bantamweight divisions. She described eating and lifting constantly. “My coach Kancho Usami instructed me to,” she said.

Now, after accumulating a record of 16-0, she is signed to the UFC. “This is the biggest challenge of my life!” she said. “It’s overwhelming, but I’ll do my best.”

What does she think of her opponent Miesha Tate? “She’s beautiful and sexy,” Rin said.

“After this, my goals are just to contribute to society somehow,” Rin said. “I don’t do any other job right now except training,” she said. “I love animals and nature, and also going shopping. But for as long as I can remember, I haven’t done much besides training, besides things that will make me stronger. I would love to travel the world, going around visiting training facilities and MMA gyms.”

Rin has a lot of videos on YouTube, and pictures floating around the internet that are revealing, creative and unique, to say the least. They are apparently to help promote her. “They aren’t really scripted,” she said about them. “Pancrase had asked for something once a week for promotion, so I had to figure something out.”

Watch this bout and the entire main and undercard on UFC Fightpass.

The full card is as follows: