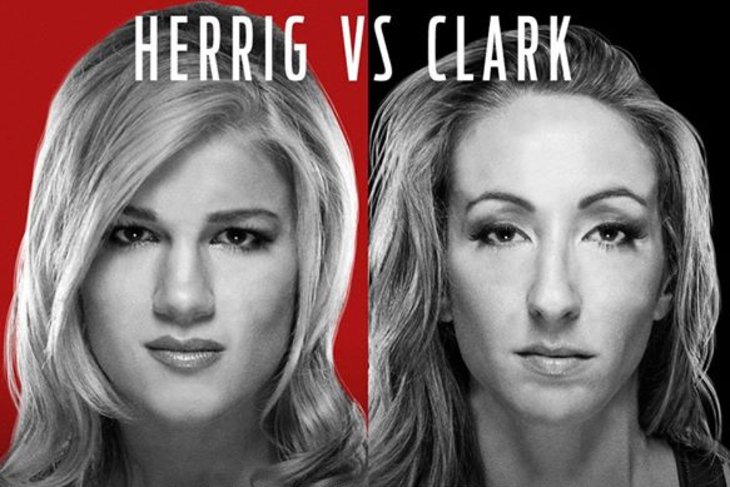 The Ultimate Fighter returned to the air with a great episode on Wednesday night.

Felice Herrig and Heather Clark were set to face each other and it has been one of the most awaited fight of the season. These two women have history, the show has done a good job during the previous episodes of playing up the drama and hinting at how strong their mutual dislike is yet retained the full information to the viewers. The wait is finally over and the rivalry is explained in this latest episode.

It turns out that everything started when Herrig refused to take a fight against Clark. The latter pushed and pushed for it to happen but ‘the little bulldog’ wouldn’t budge. They did finally fight in March of last year, a fight which saw Herrig get her hand raised but, the fight did not end there. Immediately following the bout the two exchanged heated words and aggression was flying high on both sides. This time around, Herrig could not wait to get her hands on Clark but and her opponent was all too aware that this was a battle she would face alone as her teammates have been less than supportive of her.

The episode however, started on a bit of a sad note. Justine Kish who has been struggling to keep her weight down and, in the process of pushing her body to extremes in order to do so, re-injured her knee in the last episode. The doctor visits her at the gym and tells her that she has torn her ACL and will need another surgery, of course, it also means that she is out of the competition. The fact that Kish pushed through quite a bit of training even after injuring herself in the house speaks loudly of how important the opportunity to be there was to her, beyond everything she had already been doing before hand! Her reaction to the news is visceral, it is hard to watch this woman have her hopes and dreams shattered in an instant. However, one gets the feeling she had an inkling of what was coming but had been trying to tell herself that it simply could not be. She walks out of the room from meeting with the doctor and an animalistic scream of pain escapes her lungs, not one due to her knee rather one coming straight from her heart and soul.

Following this news, Dana White has unpleasant news for the girls and their coaches. First, he has to let them know that they are losing a friend, teammate and student. He upsets them further when he decides to give #3 seed Tecia Torres, who was defeated by Randa Markos, a second chance. Torres switches teams, going from team Melendez to team Pettis and is now set to face Kish’s would be opponent, Bec Rawlings.

Gilbert Melendez speaks to White directly afterwards and let’s him know how upset he is. He states how much work he has already put in with Torres and to lose one of his fighters in a split second truly bothers him, Torres seems to echo her coach’s sentiments and fears that it will be hard to fit in to team Pettis, especially with Carla Esparza saying loudly how unfair it is for her to get a second chance and how she does not want this fighter on her team, but ‘the tiny tornado’ is all too aware of the golden opportunity that has just befallen her and does not say a word.

Fight time! Although Herrig felt overwhelmed by her coaches trying to push a game plan on her she manages to clear her head and walk out to the cage with a clear mindset. Clark, on her end, manages to empty her mind of the pent up frustration against her opponent, knowing fully well that an emotional fighter is an inefficient fighter.

Clark stands 3″ taller than her opponent but, as they clinch up at the beginning of the first round, it is clear that Herrig is much bigger than Heather. While Clark is lean and long, Herrig is pure mass! In her green team Pettis gear, Felice could pass as the Hulk if one was strictly to look at her back muscles controlling her opponent in the clinch. As Felice shoots for a takedown Heather tries to sink in a guillotine but cannot get her arm in the proper position to get Herrig in any real danger.

Most of the 2 round fight ends up taking place on the ground with Herrig dominating Clark. Clark is on top at first but Herrig manages to switch her position and ends up in north south with Heather’s arm in her grip. Clark defends the arm bar but does not find a way to attack the other fighter efficiently, Herrig is always easily able to defend and protect herself.

At the end of the 2nd round, Herrig shoots an impressively powerful takedown that sends both women flying to the cage – she shot from the middle of the octagon. She quickly mounts Clark and starts to pummel her, had the bell not rang it could easily had been stopped a few seconds later by the referee.

And so, Herrig walks away with the unanimous decision and moves on to face Randa Markos in the next round.

Next week, Aisling Daily and Angela Magana are set to face off. The preview promises an emotional episode as both women share their heavy pasts.